InDesign: how to solve this numbering issue?

I'm putting together a brochure. I want to speed up my workflow. I have something resembling a table of contents, but made manually, meaning, I have a list of galleries each assigned an arbitrary number. A numbered list of galleries (the numbers have nothing to do with page numbers, these are arbitrary numbers). Each gallery gets 2 pages in the brochure. Now I need to put those same numbers next to each gallery's name on the appropriate page . Can I do that in InDesign CS5.5 and how, so that when I change the number in one place, it will automatically change the number in the other place. Is this what text variables are for? Or do I need to write a script that would do it?

I want to kind of automate the numbering, so it is consistent, because the gallery list and numbering may change a lot in the coming days, and I'd rather avoid mistakes.

That would take me to question 2. I also have a map made in Illustrator CS5.5 and placed in the beginning of the brochure. All the galleries are marked on this map using the same numbers. Now is it possible, probably using scripting, to also steer the numbering on that map, from InDesign? Again, so that changing the number in one place, changes it in another place in InDesign and also in the AI map, linked to the InDesign document.

The easiest way to get the result you’re after is, I believe, to use cross-references. Cross-references are a way to refer to or quote some type of content from one place in another place without having to type it all out manually. They consist of two parts: a source and a target. Each of these can be subdivided into a marker and content:

In your case here, your source would be the initial list of galleries with their arbitrary numbers, your pseudo-TOC. Since you say these are arbitrary, I’m going to assume that they’re not ordered into a numbered list (if they are, the following steps will be different). Here is an example of what I imagine such a list might look like, in simplified form: 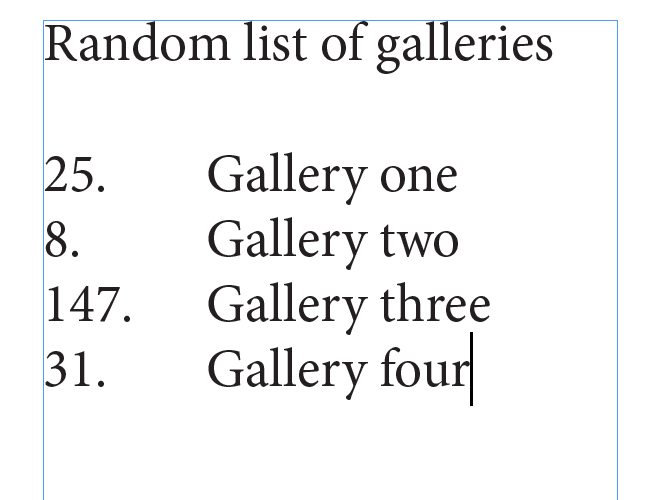 Now let’s say you’re on page 32, and this is where the spread for Gallery two (with the number 8) starts; you need to have the number and the name of the gallery as the header on this page.

Let’s insert a reference to the corresponding paragraph in the gallery list and include the entire text of the paragraph as it is as the target content. To do so, open the Window -> Type and Tables -> Cross-References panel and click on the “Create New Cross-Reference” button at the bottom: 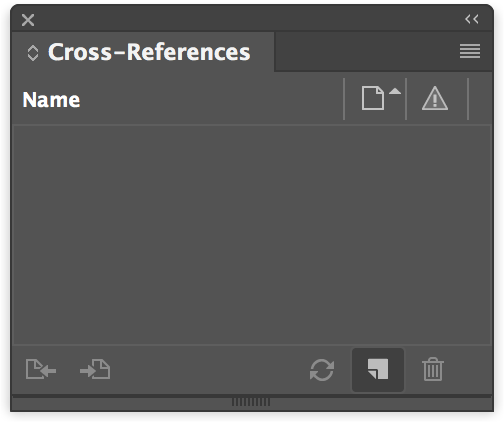 In the New Cross-Reference dialog that pops up, make sure Link To is set to “Paragraph”. On the left is a list of paragraph styles defined in the document; choose “Gallery list item”. This brings up a list of all paragraphs in the document that have this style applied, and you can easily find and choose the right one. Under Cross-Reference Format (that’s the bit that defines what text the target content contains), choose “Full Paragraph”: 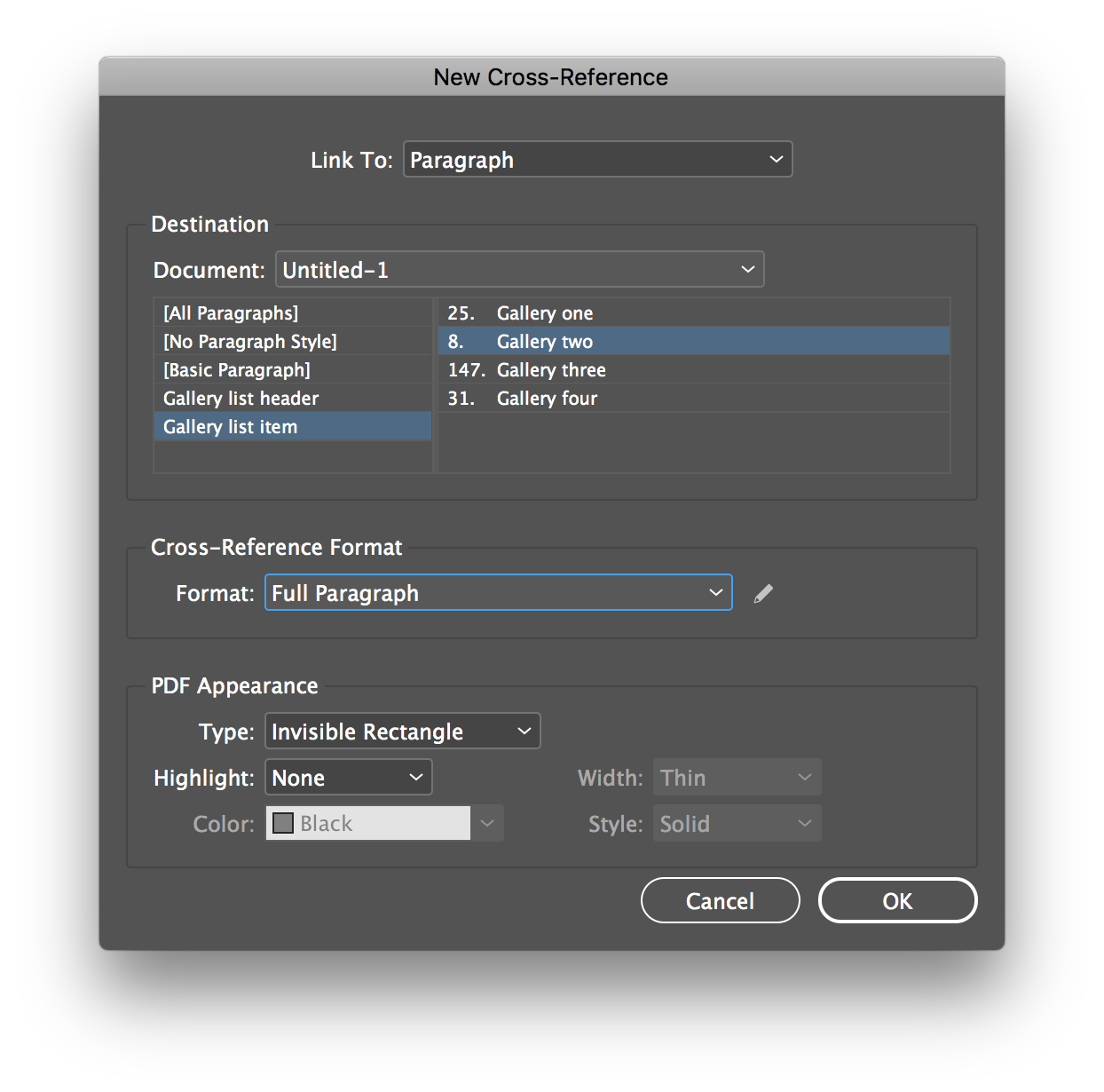 If you click OK now, you’ll see that the text “8. Gallery two” has been inserted (with a tab after the period, as in the pseudo-TOC).

On the map, I imagine you only want the number of the gallery, not the name. This is quite easy to do.

Make a little text frame in the right position on the map (i.e., at the spot where “Gallery two” is located). Create a new cross-reference just like above, but this time, instead of choosing “Full Paragraph” in the Cross-Reference Format dropdown, click the little pencil icon next to it. This lets you define a custom target content.

In the dialog that pops up, click the “+” icon bottom left to duplicate the current style. Give it a logical name (I’ve called it “Gallery number”). In the Definition field, which is a free-text field where you can mix a limited subset of code with plain text, change the content to

(You can also click on the “+” icon on the right and choose “Partial Paragraph” from the dropdown menu, and then add in the period manually.)

If your layout uses something else to delimit the numbers from the gallery names in the list, replace the period in the code here with whatever comes right after your numbers.

If you need to update the number (or the name for that matter) of various galleries later on, you now only need to do this in one place: the pseudo-TOC.

As soon as you change anything in the source content, your existing cross-references will become unreferenced, noted with a yellow “⚠️” (warning triangle). To update them, simply click the “Update Cross-References” button: 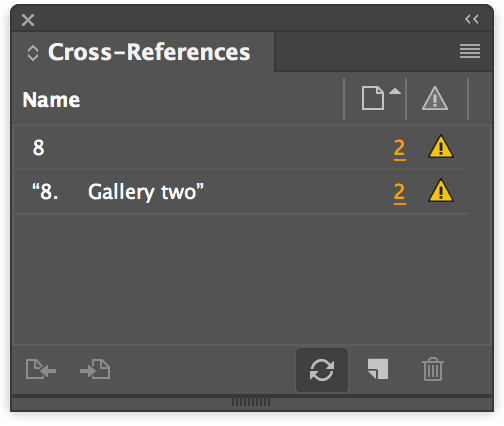 Not the answer you're looking for? Browse other questions tagged adobe-indesign automation indesign-scripting numbering or ask your own question.

2
InDesign 5.5 Section Numbering
1
How to get continuing numbering in textboxes in InDesign?
3
Page numbering in PhD thesis
4
Bullets combined with numbering for InDesign?
0
How do I match *.pdf page numbering when I don't count my front page?
0
indesign: starts number from 1 mid way through doc
0
How to set Table of Content numbering to use 01, 05, etc. for page numbers
1
(InDesign CC 2019) Continuous page numbering was cancelled and each file in Book Panel has own page number?