What are the mechanics of “bounce” light? How does it work?

I'm a learning 2D artist, trying to learn more about light and I am having trouble with diffuse "bounce" light. I would think that reflected/bounce light would illuminate certain areas evenly. In the picture below, if the cylinder is being lit by a sun, then why do points A and B have different values? Does this have anything to do with light falloff? And why is the bounce light most intense on the bottom of the side instead of the front?

Most of the stuff I have read about bounce light doesn't talk about the mechanics of it, other than a sort of general explanation. When actually rendering, I want my decisions to be informed when I make them. On real life examples of objects, the reflected light forms certain shapes and patterns, and I just don't understand how they are made. So if anyone can help, and could give an in depth look into how bounce light works, it would be greatly appreciated. :) 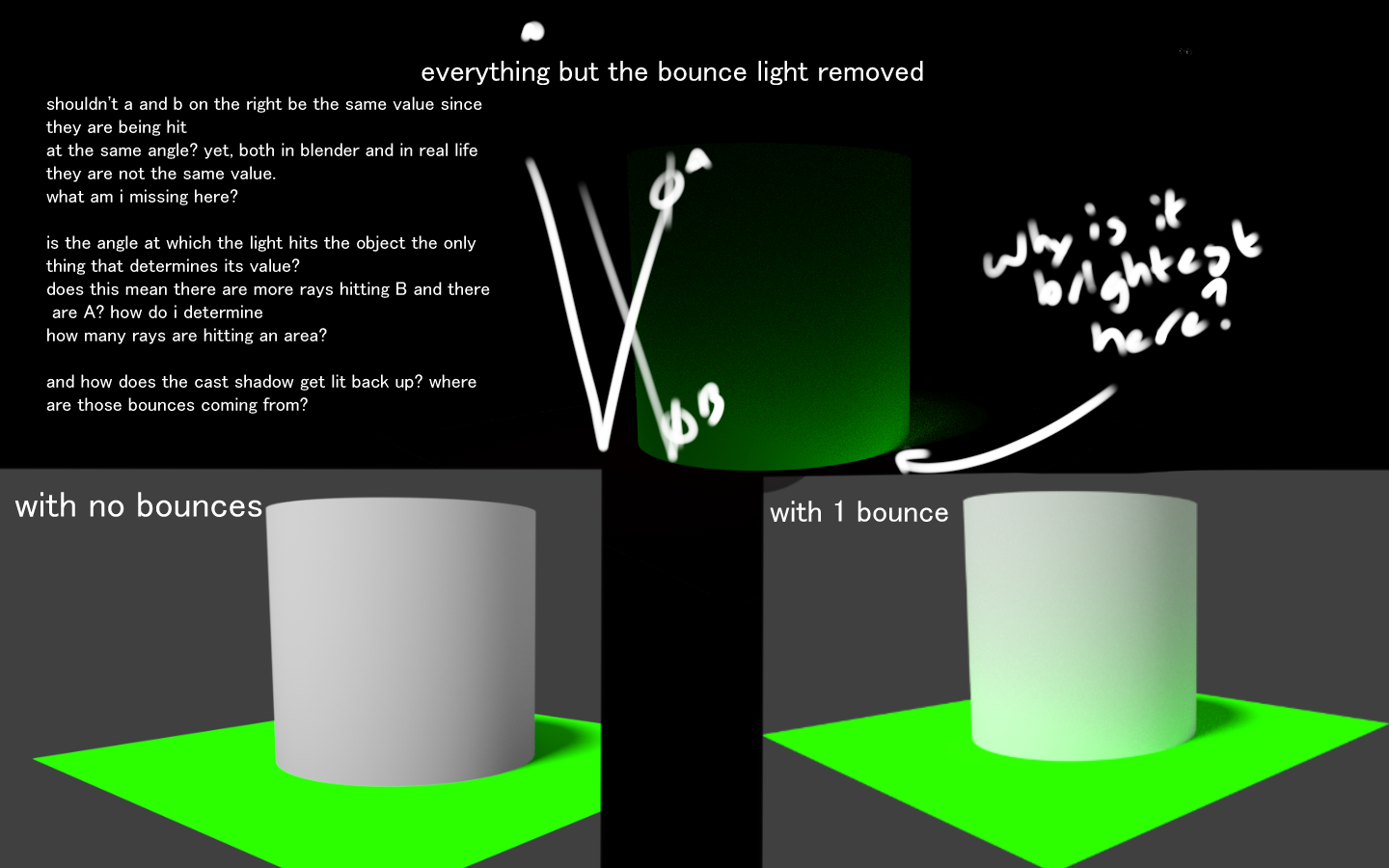 (The questions inside the image)

The first and most basic concept of light you should know is:

Direct light vs Diffuse or soft light. You probably already know it on source lights, I will describe it because is the same concept. 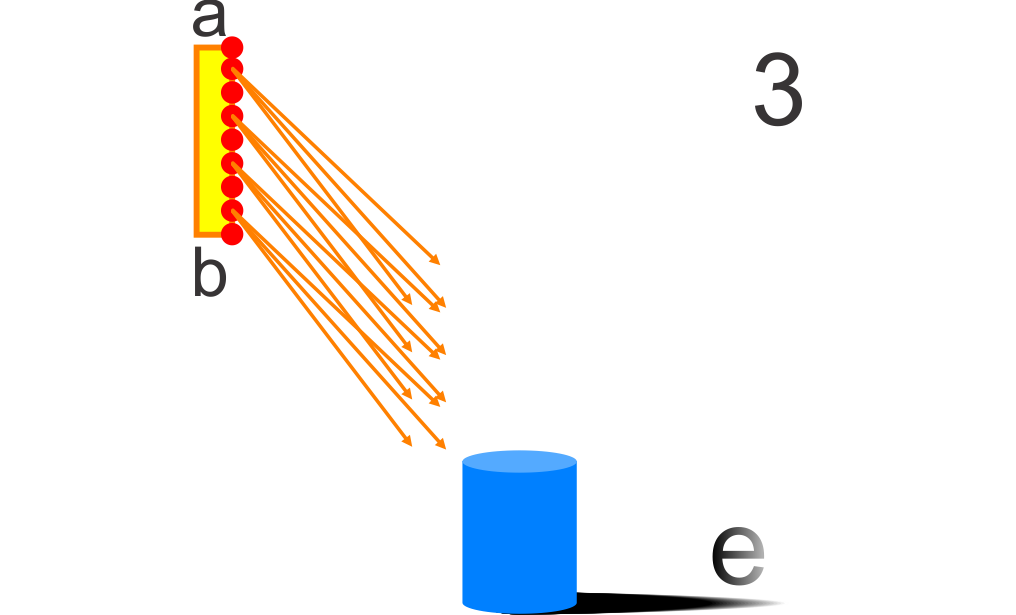 Some rays simply go away from your object and do not come back (h). 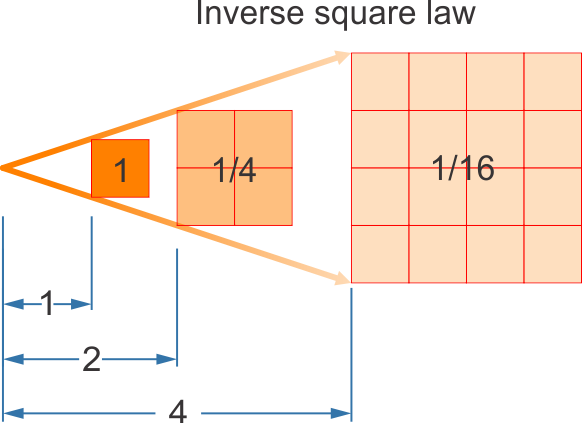 The answers to your questions on the attached image.

No, they are not hit at the same angle because the material you are using is not a mirror, it is a matt material, exactly like a pool table. See point 6.

What you are missing is that the further away from the source light you are the less light you get, this is the inverse square law.

How the light hit an object is determined by

By the inverse square law. The closer you are to this (new) source light (the matt material) more light you have, the further away less light you get.

But you need to determine two light sources, the incident light and the bounced light. In this case the inverse square law applies more to the bounced light, as this is the main problem you are describing.

You are mixing concepts.

The cast shadow in your diagram is gray, this is implying that there is an ambient light that you are not seeing, the roof of a room, the sky of the planet.

But on your diagram what you consider cast shadow is self shadow, that, it is also gray because the ambiet ligh, but have some bounced green light from all over the floor. 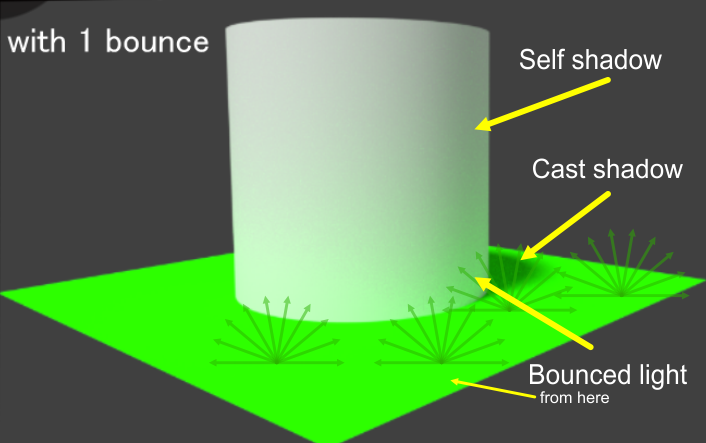 In the image you are posting, the "only the bounced light" render, there is a chance you are "forcing" the Blender material too much making it not natural.

I am simulating roughly this bounced light.

See the angles depending on the type of the floor's material. Your example has more light on the right, but it looks more like if this reflective surface is in an angle.

Light falloff is irrelevant since the surface is somewhat uniformly light (light falloff, only really meaningfully applies to small surfaces sending light). The explanation of how it actually works is pretty meaningless if you paint by hand eye coordination. It is a completely another thing when your actually working with 3d images like the one here.

But if you want to understand it at a model level then here you go. The amount of the bounce light is proportional to how much the surface is visible to each point. In this case its the table below is less visible the higher you go. The color diminishing follows the formula (π-atan(a))/π Where a is the normalized height (a = A/B). 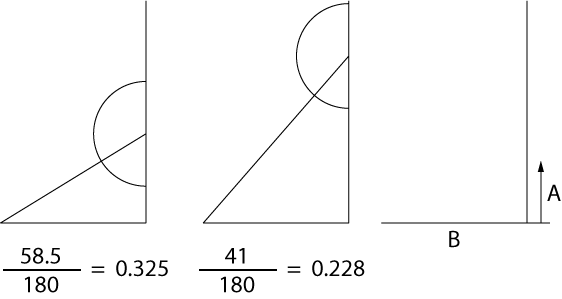 Off course reality inst a slice so you end up winging it.

All this said: For a 2d artists its better to look at references and learn form that.

Here's my explanation which involves a concept in physics that I learned in photography.

Light diminishes in intensity the further away it is. For your example, the brightest area is closest (right next) to the lit surface it sits upon. The top of the cylinder is further away from the surface so the light hitting it is less intense as it travels (bounces) further from the base.

Your illustrations show this beautifully. The bright green allows you to see and distinguish that light has bounced from the green surface onto the neutral grey cylinder.

Perceptually, you notice the effect more in the shadow of the cylinder as a greater proportion of the bounced light shows where the main light has been masked by the cylinder itself. (That concept is known as Weber's Law.)

For those physicists among you, the physics concept is the inverse-square law: light intensity varies with the square of the distance.

Your answer: The bounced light is a different diffuse light source for argument's sake.

Have any source of light which distributes the light into different directions. The physical fact: "As the distance increases, it makes the objects less illuminated". This is because the same amount of light spreads to larger area when the distance grows(see NOTE1 ).

In sunlight your head and foot can seem equivalently illuminated, because the distaces to the sun are virtually the same. The about 5 feet difference is in percents insignificant. The differences should be compared merely in percents than in feets or meters.

Any illuminated surface must be considered as a light source. Your green plate is not an exception. The brightest bounced green is near the green platform and the green illumination diminishes as the distance increases.

The highest green illumination does not mean the most visible green illumination, because the direct sunlight easily makes so much stronger illumination that our very limited eyes nor our 1000x more limited cameras simply cannot detect the slight green under the strong white light. The strong light easily saturates the ability to see the colors. (The same is true with our displays which really get saturated and show only white, if the general brightness is too high)

Thus in the shadow the bounced green can appear to be much more visible than the much stronger green near the platform but under a strong direct sunlight.

NOTE1: Not true for lasers or other nearly zero beam angle sources at short distances. But well obsevable when using ordinary light sources. For example go to a dark room with a flashlight. Direct the light to the wall or door. See, how the illumination gets dimmer as you walk further. At the same time the illuminated area grows.

Not the answer you're looking for? Browse other questions tagged lighting-effects or ask your own question.

1
Light baking, what is it?
0
How to apply a texture preserving the lightning of the original
1
How can I draw different light shades inside an object?
4
How to create a light highlight in Inkscape?
1
How I can do this “light streaks” or “linear lights” in photoshop?
1
How to get a color scale representing reflected light
2
How to create light cone and haze effect
3
Repeat a bokeh light pattern the most naturally in Photoshop
0
Hard light is greyed out, how can i access this?