I am working on the editorial design of a book and Lucas Bihan of Bretagne Type Foundry was kind enough to give me access to a trial version of his serif typeface »Self Modern«, which I am now using for a draft.

A preview of Self Modern:

Unfortunately, the typeface does not include the Umlaute (ä Ä, ü Ü, ö Ö), which I need since parts of the book are in German. What I would like to do for the draft, is to use Glyphs and take the existing a A, u U and o O of the typeface as the basis for creating the Umlaute myself, of course in communication with Lucas.

Not being a fully professional type designer, is there someone who could provide me with some information regarding the design of the Umlaute, specifically in a serif typeface? I assume there are things to keep in mind and an Ä is not created by merely copying the A and putting a couple of dots taken from the i above it.

You can find a lot of useful information and resources for designing diacritics here:

When designing a latin-based typeface, how are diacritics handled?

Specifically in this case The Diacritics Project. Which says:

The basic form of diaeresis and umlaut are two dots. The symbol thus may be created of two dots same as the one above i, placed in the same height. Sometimes, it is visually more pleasing to scale down the dot accents. However, even the scaled down dots should be of the same shape as the dot accent.

So in theory you can just take the existing characters and dots in the typeface.

In Glyphs you need to create new glyphs for the diacritics you're missing and set up anchors for those diacritics so Glyphs can auto-generate the combined glyphs for you.

Right clicking the relevant item in the Languages section of the left sidebar of the font view will show you the glyphs you're missing and let you generate them... 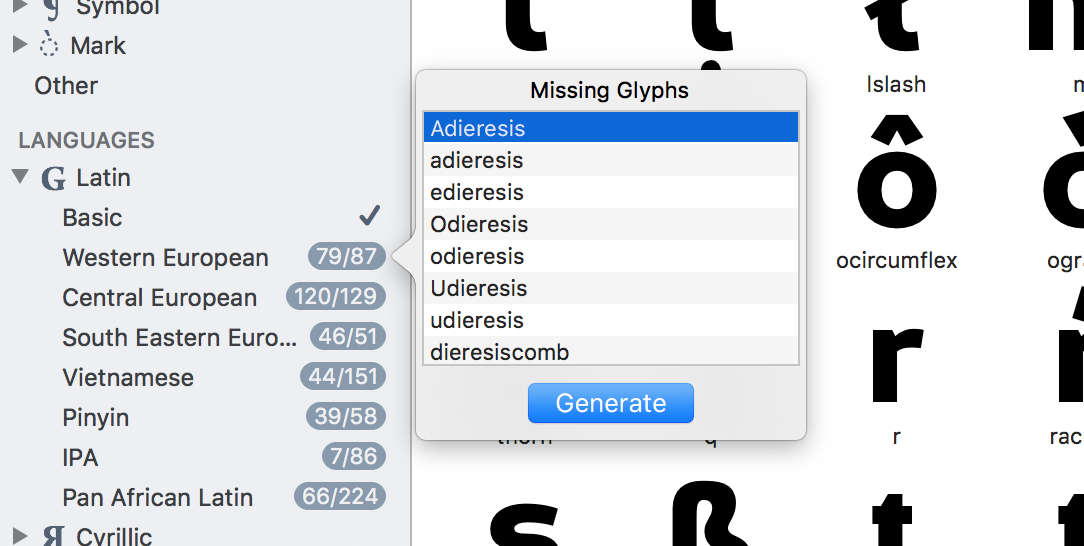 Note; the glyph you want is the "Dieresis", what Glyphs calls the umlaut is actually a double acute.

To make things easier, first generate only the diacritic glyph.

Then you need to create the paths in the glyph (so copy/paste some dots and scale/reposition as needed). Set the anchors while you're there too (cmd+U); the anchors are used to position the components in the generated combined characters so you may or may not need to adjust the anchors.

Then go back and generate the combined characters.

Creating the diacritics first allows Glyphs to auto-generate the combined characters as they are created. Otherwise it would have generated everything as an empty glyph and you would need to go through each and go to Glyph → Make Component Glyph to auto-generate them.

More info on setting up diacritics in Glyphs here:

I assume there are things to keep in mind and an Ä is not created by merely copying the A and putting a couple of dots taken from the i above it.

While what you describe works surprisingly well, there are a few small pitfalls:

Of course, depending on the length of your text, it may be worthwhile to check whether the above rare problems actually occur before you spend time on fixing them.

¹ Be aware that there are more potential problems in non-German text.

17
When designing a latin-based typeface, how are diacritics handled?

21
How are Serif and Sans-serif fonts different, and when should one use one over the other?
58
"Serifs improve fast, easy readability for long text" - myth or truth?
4
Is there research on the preference of sans-serif fonts in printed text for Western European countries?
4
What's the difference between Display and Serif Fonts
6
What typeface was used for the titles of early Venetian Jewish books?
3
Problems looking for a specific sans-serif typeface
9
What is the name of this classic serif typeface with large round counters?
0
Is Typeface and Type Family the same thing?
1
What is a good Google Fonts serif typeface for a content website?
1
Which sans-serif pairs are good using typeface Foco for headlines?