How to animate vector art designed in Inkscape?

I want to create an animation this way: let's say, I create a circle with multiple nodes in Inkscape, maybe save it as .svg, then edit it, and save it as another file. Now I want to place both of these vectors in an animating software, leaving some frames between them, press render and an animation is created, the software filling the frames between 1st and 2nd vector. Is there a software that does this?

I don't know of such software, but there is an approach, which might help you to do the job partly in Inkscape.

You draw an path, copy it, modify the copy.

1) Now you put them apart, let's say for 5 frames in total, you leave about 3 times the width empty.

Then you select both, in the menu you select: extensions/from path/interpolate (might slightly differ, I translate from german settings) and choose 3 steps without duplication.

2) Then Inkscape will generate the transformations. 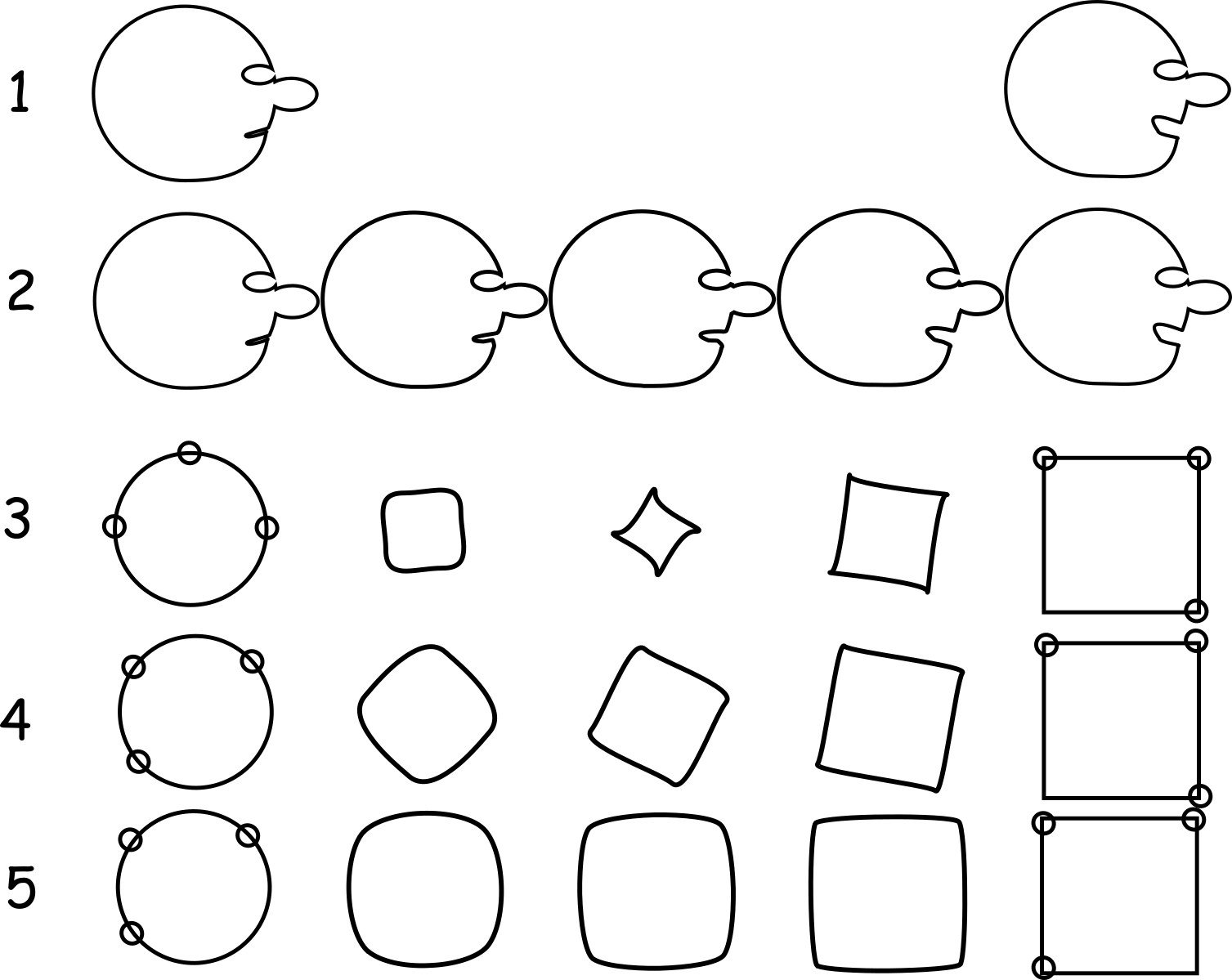 Sometimes it will be what you wanted, sometimes it might end pretty unexpected, since the form is not transformed in the way, you would expect it from a viewpoint, but from the construction point, which means, that the constructions points move toward their destination. Then it might be tricky to achieve, what you planned for.

3) The small circles are just to indicate, where the keypoints of construction of the initial circle and the ones of the rectangle to finish with are. They were not part of the transformation. Therefore the circle gets shrinked and rotated, then blown up again. Most probably unexpected, in the beginning.

So we turn the circle (4) that the construction points aren't in the top/bottom middle and left/right, but on the 45° axis. Still not perfect, but better. The orientation of first, second, ... node is significant. Symmetry is not considered.

5) So we turn the rectangle by 90°, so that the node numbering matches, and now we get, what we wanted.

Ok, now for the animation. To get 5 different pictures, for example back to the face, you first have to ungroup the 3 new faces in the middle. Then mark all 5 objects. Select from the file menu export/selection/batch export 5 images and confirm. They get generic numbers. But the two original faces have lower numbers than the 3 calculated ones, so for that reason, I guess, there is the option to duplicate the original images, but then you have to move them away to not overlap the original.

Now you have 5 images and can create an animated gif, for example, from them with an external tool like convert, from ImageMagick. That's more convenient if they are numbered in the right order.

For larger numbers, this can be further automated with a script, of course.

For doing the actual animation part instead of exporting to gif you can use this open source utility called SVG Animation Assistant. There is a Windows version available.

Disclosure: I am the developer of this program.

Not the answer you're looking for? Browse other questions tagged vector inkscape software-recommendation animation or ask your own question.

3
Free vector design app besides inkscape?
3
Using inkscape to convert scanned color drawings to svg — recommended or no?
4
Coordinates of groups in Inkscape
5
How are the animations of these vector art type made?
3
Combine multiple spray clones into one single object in Inkscape
1
How to retain only the black outlines of colored drawings, and then convert to SVG (vector file)
0
New to Adobe Animate. Trying to make a frame by frame explosion. Need help
2
Inkscape to Gimp - Layers
0
Keep last parameter from one task to the other in inkscape