What is this calligraphic font?

Does anyone know what this font is called? I have tried the font identifier programs online, but it wouldn't work because of all the swishes. I really love this font!! 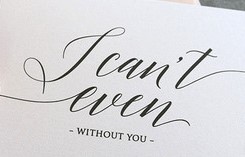 It's not a font - or it has an enormous collection of variations - pairs as ligatures. Both e's are different, both n's are different. The beginnings and the endings have nothing common in some easily defineable way.

It can be manually drawn or modified from a font. I believe in the latter. Both cases need skill well above beginner's level and some talent, too.

One candidate for the starting font is Mallicot Script:

It's sold at least by FontSpring. Check their website. It can recommend nearly similar others.

Mallicot Script Extras is another font, but it's included, if one purchases Mallicot Script Regular. I believe those curly swishes are partly taken from the extras.

Not the answer you're looking for? Browse other questions tagged fonts typefaces calligraphy or ask your own question.

1
What wavy italic font is this
1
What Sans Serif font is this?
1
What font has this weird H?
0
Please help identify this font - Have tried all font identifier programs
0
Does anyone happen to know what font this is?