How to create harmonious color palette?

Look at these harmonious colors, they come from Google Material Design. I'm wondering how did Google designers create them? Expert knows that dark yellow will turn into lemon (with little green in it), but following palette doesn't have this problem. Is there any algorithm to fix to keep yellow yellow? Shifting hue of the color by color luminance? Any ideas? 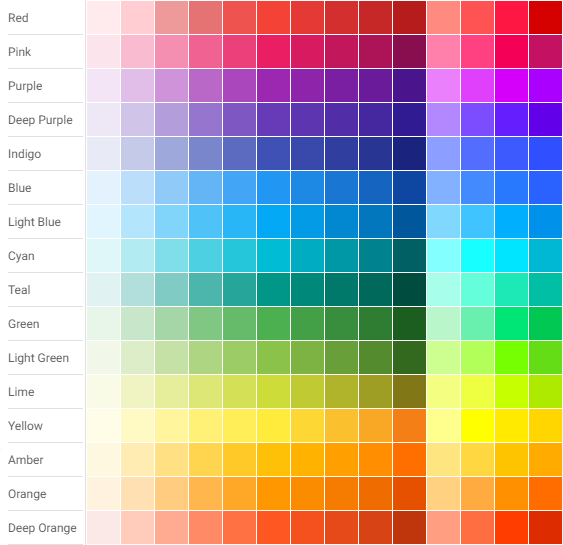 Using Adobe Illustrator, it's an easy matter to use blends to generate middle stages and color strips.

Then blend between the 3 steps... 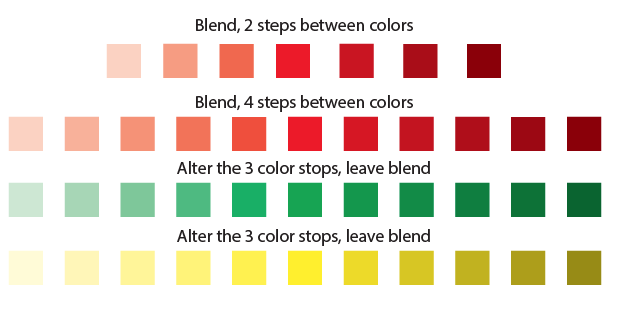 As for why "yellow doesn't turn green".. it's because red is added to darken the yellow, rather than black. This pushes the dark side of the blend into the orange spectrum rather than green... same blend though...

If we make a gradient in Photoshop from maximally colorful and bright yellow RGB=255,255,0 to a darker version, say 128,128,0 it really can be seen as greenish at the dark end. It's shown in the uppermost stripe of the next image: 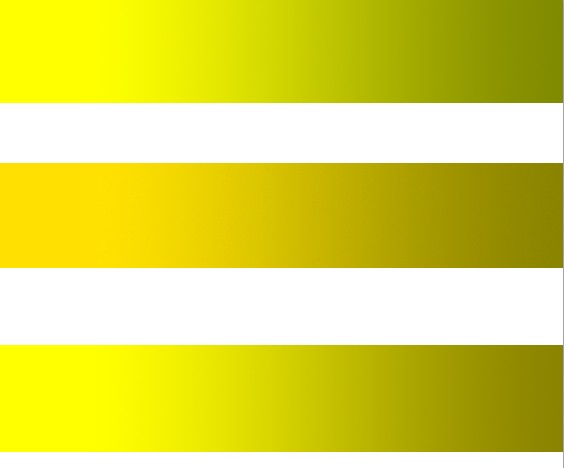 This is a property of our sight and how RGB screen excites it. Green starts to be obvious in the halfway of the gradient.

The mid stripe is the same as the first one, but got -7 degrees hue shift (=towards red) Bright yellow turns to a little orange but there's less green.

The third stripe has still 255,255,0 at the start, but the end is color 128,128,0 with -7 degrees hue shift. There's clearly less apparent green than in the first gradient, which proves your theory. Wider hue shift than -7 degrees can be used for more orange ending.

7 degrees here or there can unfortunately be also caused by the differences between computer screens. Another source for hue shifts is the numerous conversions between the production and the final display.

A guess: for this reason Google hasn't even tried to only compensate the apparent green, but made it clearly orange.

Not the answer you're looking for? Browse other questions tagged color interface-design palette or ask your own question.

7
How can I make the color white look as white as possible?