Transform an image into parallel lines with varying distance?

For pen plotting, I would like to transform an image into many parallel lines. Depending on how dark a spot in an image is, the parallel lines are more or less densely packed. 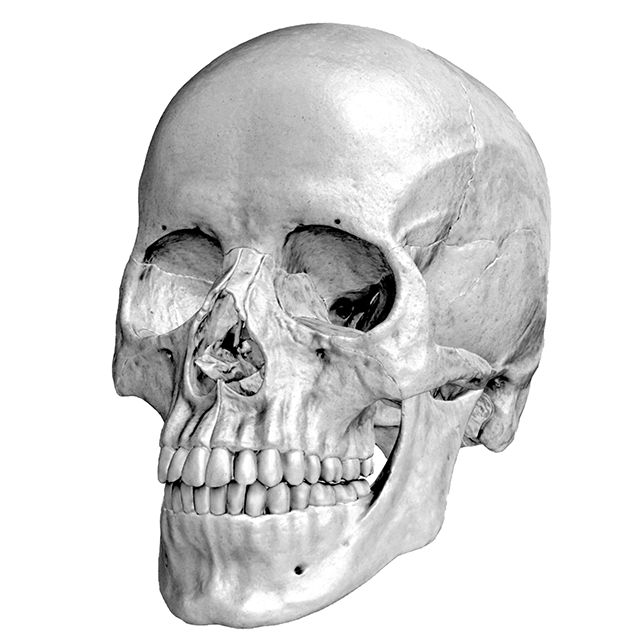 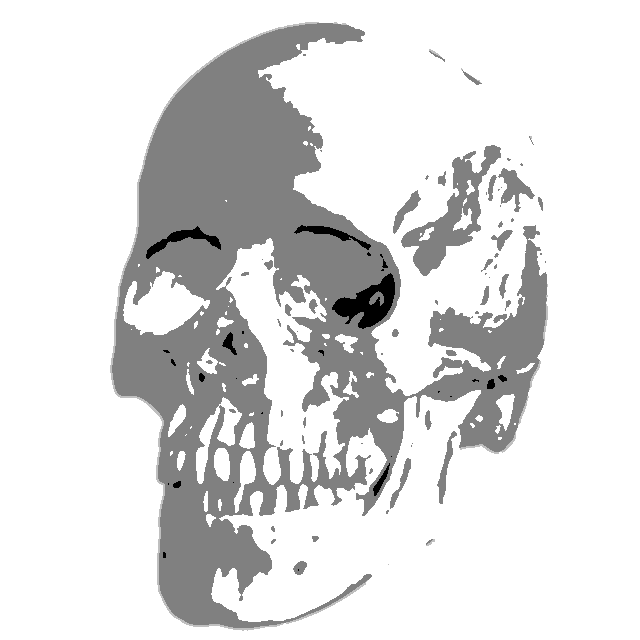 --> select each color (white, grey, black) and put them into their own layers

--> in every layer, select the color to get the outline

--> painted it with a paint brush with a parallel-line-brush 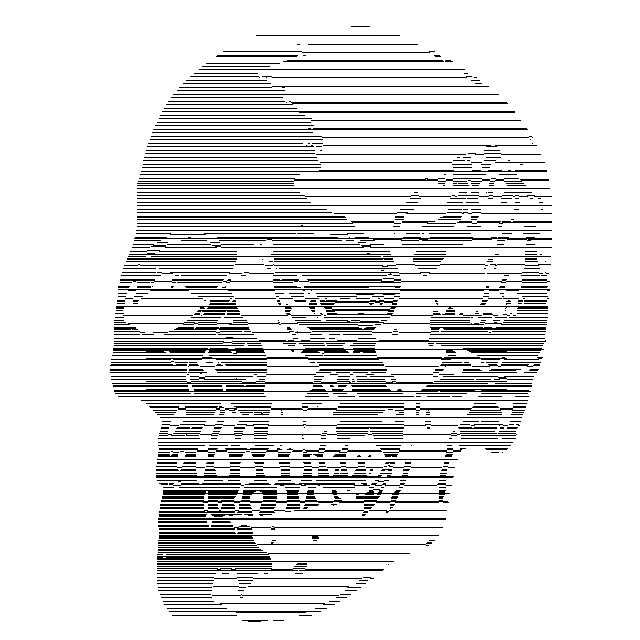 How to do this in less ugly? Currently, both the result and the workflow are ugly.

Are there good search terms to search this technique? Maybe some tools, instead? I found halftone to be ALMOST the term I am looking for, but I would like to get lines, not dots.

Seemingly no advanced methods presented in 2 days after the question. Also I would like to see for ex. a plugin or script which does the job perfectly with low effort and preferably gives so many greyshades that the shading caused by the 3D form of the skull is well reproduced. I have seen as ready to use software only methods which vary line widths or dot sizes for half-toning. None of them was able to vary the density of constant width parallel lines. When waiting for it you get an answer which applies Photoshop's and Illustrator's basic functions in a straightforward way.

Your attached skull image has white as well on the skull and background. It's useful to darken the skull a little to let the white present only the background. There's also another reason to preprocess the photo in Photoshop. The easy method to convert greyshades to line densities that I know allows only a limited amount of different greys. The greyscale of the photo must be adjusted and the result must be posterized so that the curved form is presented well enough with the limited number of greys. Here's one attempt: 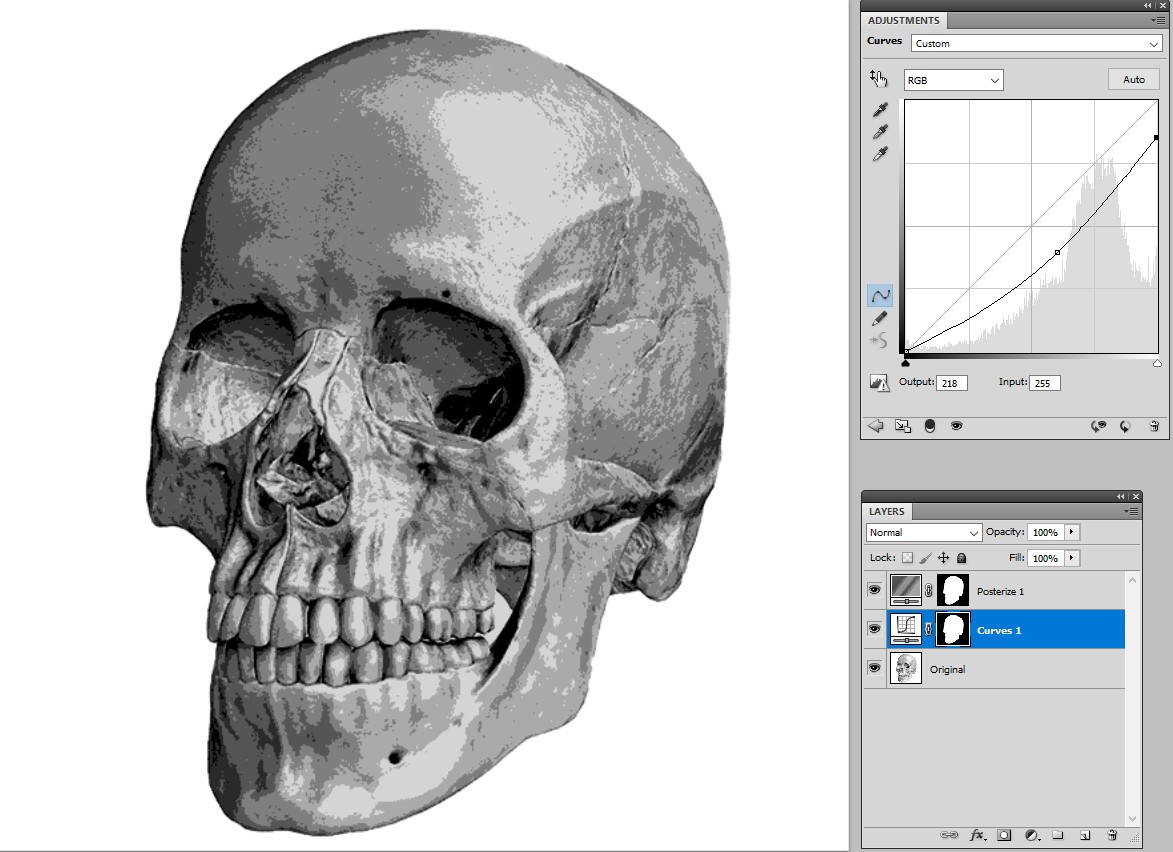 There's a layer mask (a converted selection) to keep the background white. On the top there's adjustment layer Posterize to 7 colors. The greyscale is modified with curves layer so that the shading looks plausible with black, white and 5 greys between them.

The result has harmfully much small details. They cannot be presented as line densities better than as a dot. It can be useful to filter out small details in Photoshop to have simpler image in Illustrator. Illustrator fortunately has a possibility to ignore too small areas. We skip filtering (=Median and Cutout)in Photoshop and check at first what Illustrator gives.

In Photoshop we duplicate the layers and merge the duplicates to get a single layer, but to also keep the separate layers because some tweaks mey be needed. We copy and paste the merged version to Illustrator for tracing.

In Illustrator we duplicate the image to be able to see in the preview how well the tracing succeeds: 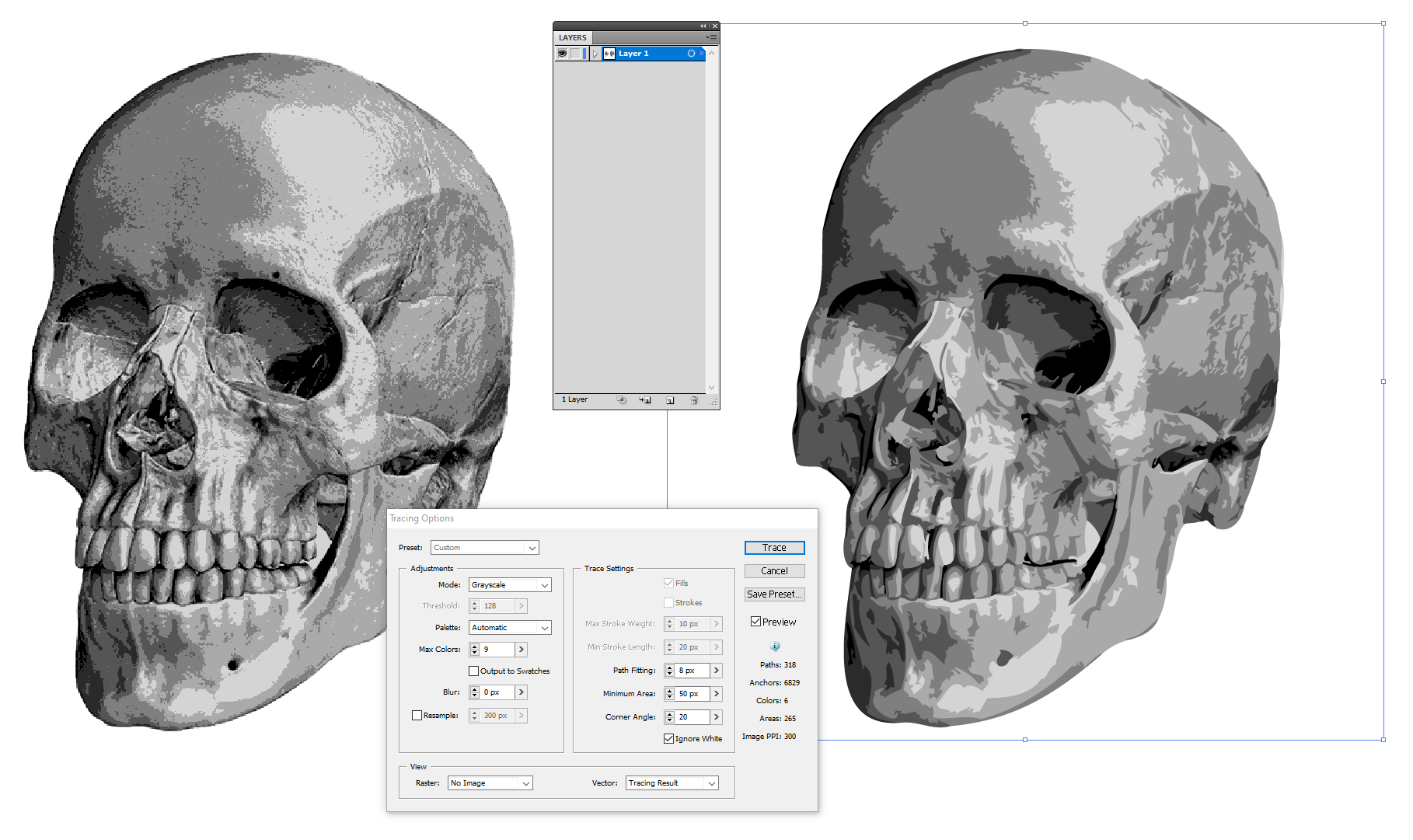 In the left there's the duplicate of the image and in the right there's the preview of geyscale tracing. We had to lift the number of the greyshades to 9 before Illustrator found all of our 6 non-white greyshades. White is ignored, the minimum area is lifted to 50 px and as much as 8 px inaccuracy is allowed. The statistics in the tracing dialog tells that there's 6 colors, hundreds of paths and thousands of nodes. It's not at all a simple. The preview looks for me acceptable, so we expand the tracing result: 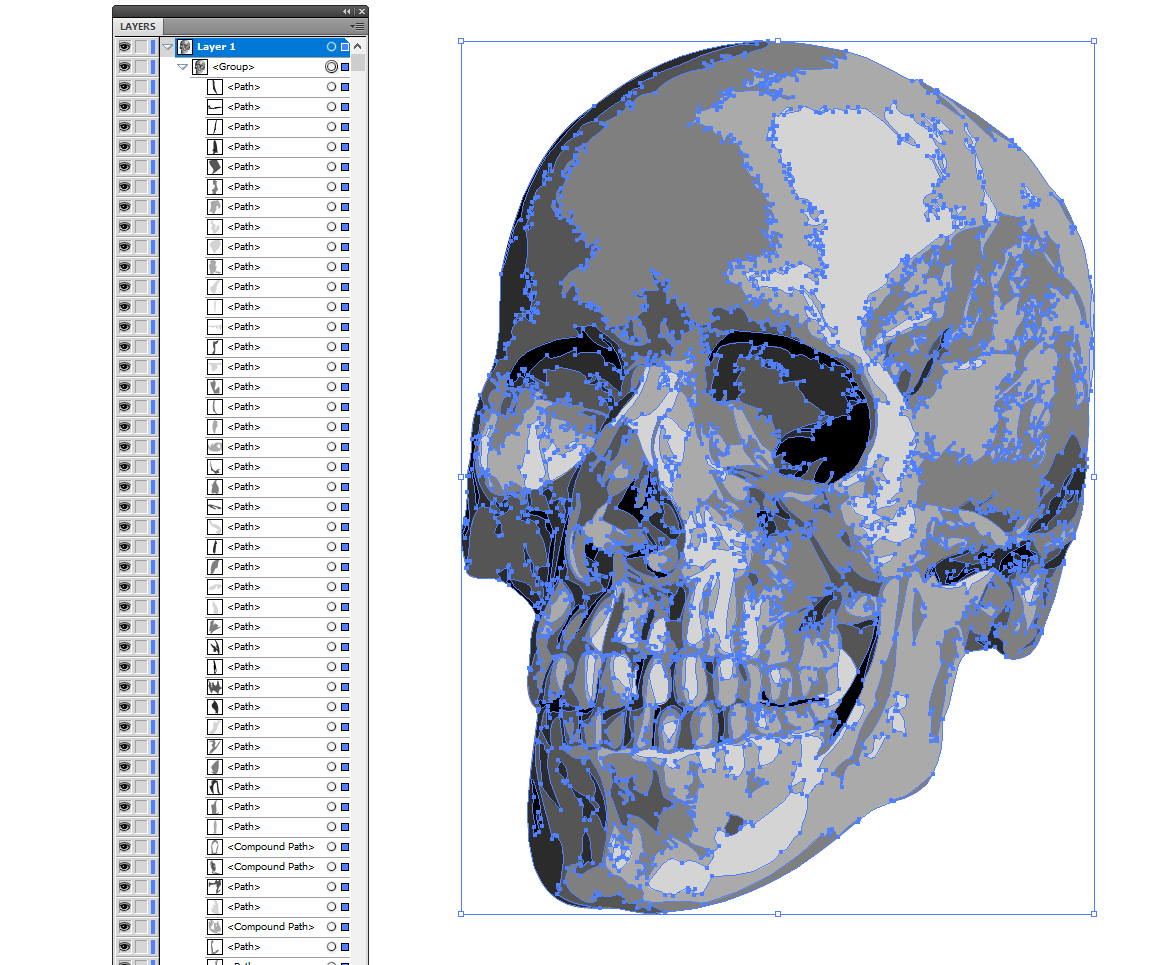 To make it easier to handle we ungroup the result. Then we select at first one of the lightest shapes, select all of the same color by applying Select > Same > Fill color and combine them to one by applying Pathfinder panel's Unite. Pathfinder actually only groups the selected shapes because they are not adjacent. In the same way we create one group for all 6 greyshades: 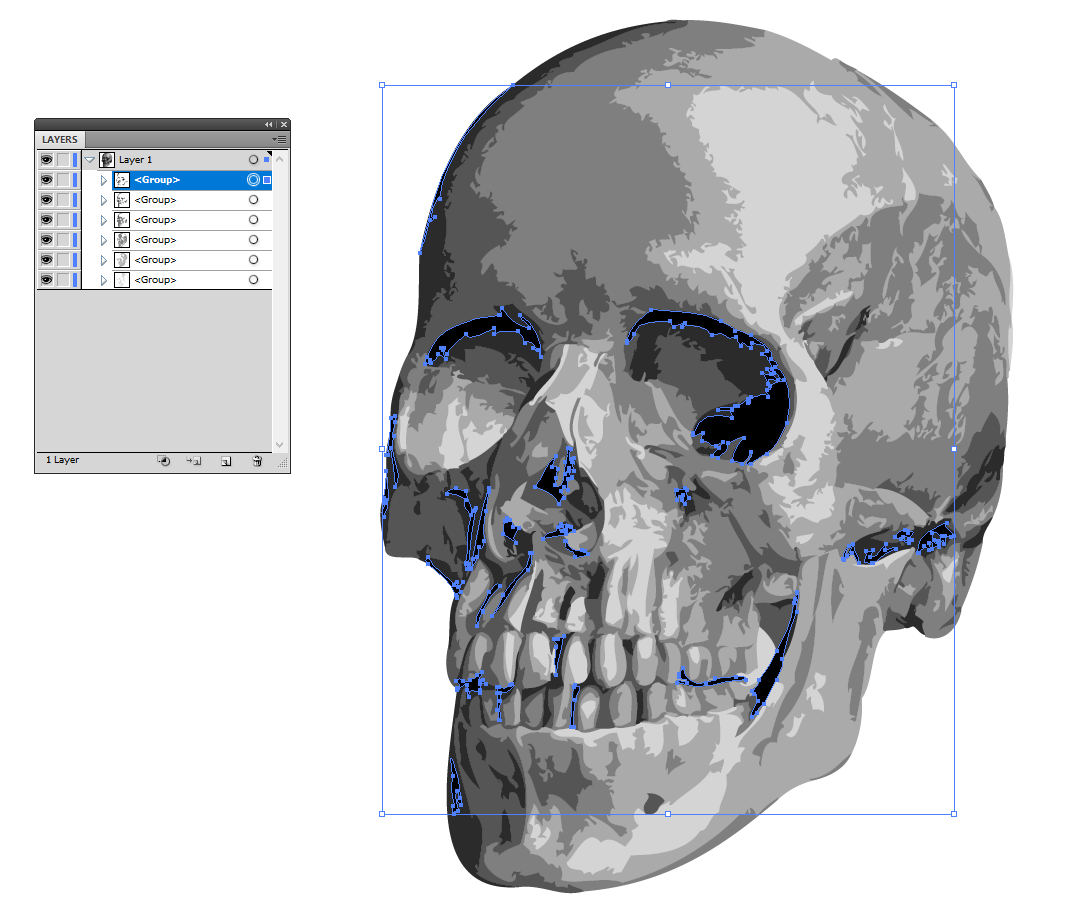 The image is the same as above, but the object list in the Layers panel contains only 6 groups. The group of blacks is now selected.

The image is ready to be half-toned. We can fill the areas with line patterns. Any line patterns can be used. I have used in older cases lines which have constant density, but varying widths. It was here: Create engraving in GIMP/Inkscape You wanted horizontal lines with constant line width, but varying line density.

You could prepare 6 whole image sized line patterns and use the groups as clipping masks to them. In Illustrator one may want to use custom pattern swatches as fill colors.Unfortunately having strokes in pattern swatches are tricky; Illustrator generates unwanted slight gaps and I have still not found a way to work around it. The gaps are well visible in my version given in a comment above: https://i.stack.imgur.com/zfNog.png

It's possible the gaps are caused by a bug in the legacy Illustrator I use and it can be non-existent in modern Illustrator versions. Filled line-like areas - in your case wide, but low rectangles - work better.

The lines must be narrow enough to be able to to present small enough details, so finding a good swatch pattern square size and line width (rectangle height) is anything but trivial. We cannot do any optimization calculations based on advanced models of visual recognition processes, we can only apply the trial and error -method to find something acceptable.

We have also an opponent: The display. Tightly spaced lines interfere easily with the display pixel grid. That's known as Moire effect. You wanted horizontal lines which make the problem as bad as possible.

But let's stop worrying our poor ability to take everything into the account. The skull in my image is scaled to be 120 millimeters high. 1x1 millimeter pixels seem to be able to present the differently colored areas recognizably as the next image shows (scaled to 120 px high in Photoshop with nearest neighbour resampling, undone after seeing the result): 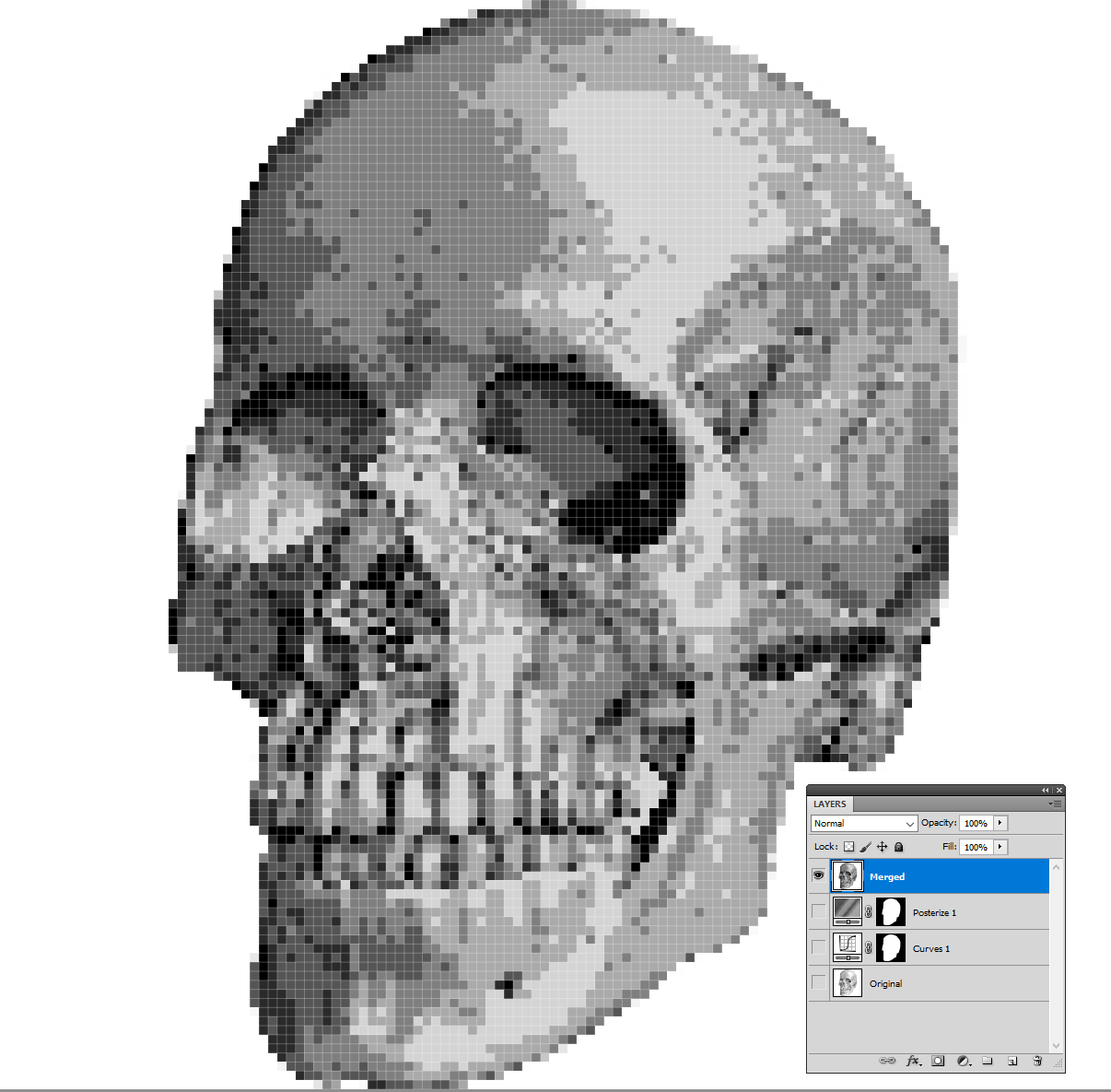 I tried also it as 90 px high, but the teeth vanished. So let's have our fill patterns made of 1 x 1 millimeters squares. That can be much more than what's actually needed, because the parallel horizontal line half-toning has limited resolution only in the vertical direction, the horizontal resolution stays the same as in the original image and that helps the recognition.

The final greyscale is problematic. The lightest areas should have one line per vertical millimeter. The 2nd light color must have 2 lines per millimeter, it simply cannot be proportionally more because our resolution element was 1 mm high. Respectively the next darker greyshade must have 3 lines etc... The darkest (full black) part should have 6 lines and that should define the line width. It should be 1/6 (about 0,167) millimeters.

My preliminary tests revealed that solid black looks wrong. Some lines should be visible also in the darkest areas. And the white gap between the lines should be also visible. The lines can be only about 0,1 mm wide to leave some visible gaps.

Common computer displays have say 0,2 or 0,25 millimeters high pixels which simply cannot show properly 1/6 nor 0,1 millimeter wide lines. The image becomes impossible to be shown properly on usual displays without substantial zoom in. The only solution is to use a less dense halftoning which works better on displays. It doesn't spoil the recognizability if the less dense half toning method is effective enough or one uses simple enough image.

But you asked parallel horizontal lines, so you get them, no matter you can see maybe only a quarter of the skull properly at a time.

I prepared 1x1 millimeters squares which have 1,2,3,4,5 and 6 lines. The lines are actually 0,1 millimeters high black rectangles. The gaps between the rectangles are calculated with Excel:

A = the side length of the square, 1 means 1 millimeter. W means the line width. G, the gap between the lines has formula G=(A/N)-W.

There's a light grey 1 x 1 millimeters square as the base of the resolution element. I drew a G-high rectangle to be used a snapping guide to get the line spacings right. The base square must be kept there to make the elements exactly 1 mm high. No misaligment is allowed, one MUST know how to use point snapping, smart guides and shape alignment.

The patterns are draggedt to the swatches collection and applied to the different color groups:

The next screenshot shows how the display interferes with the image: 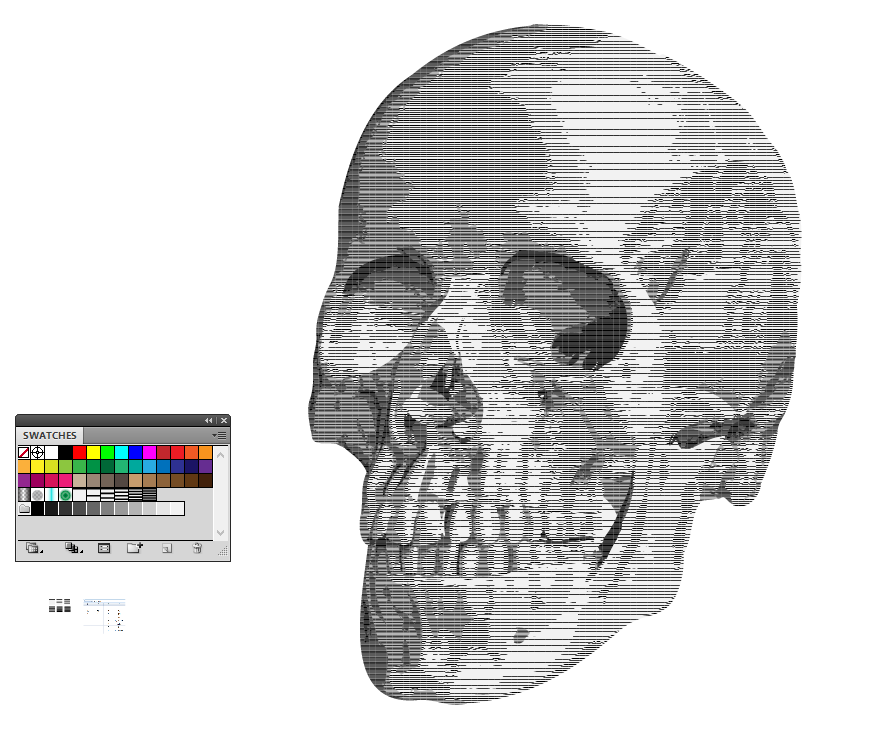 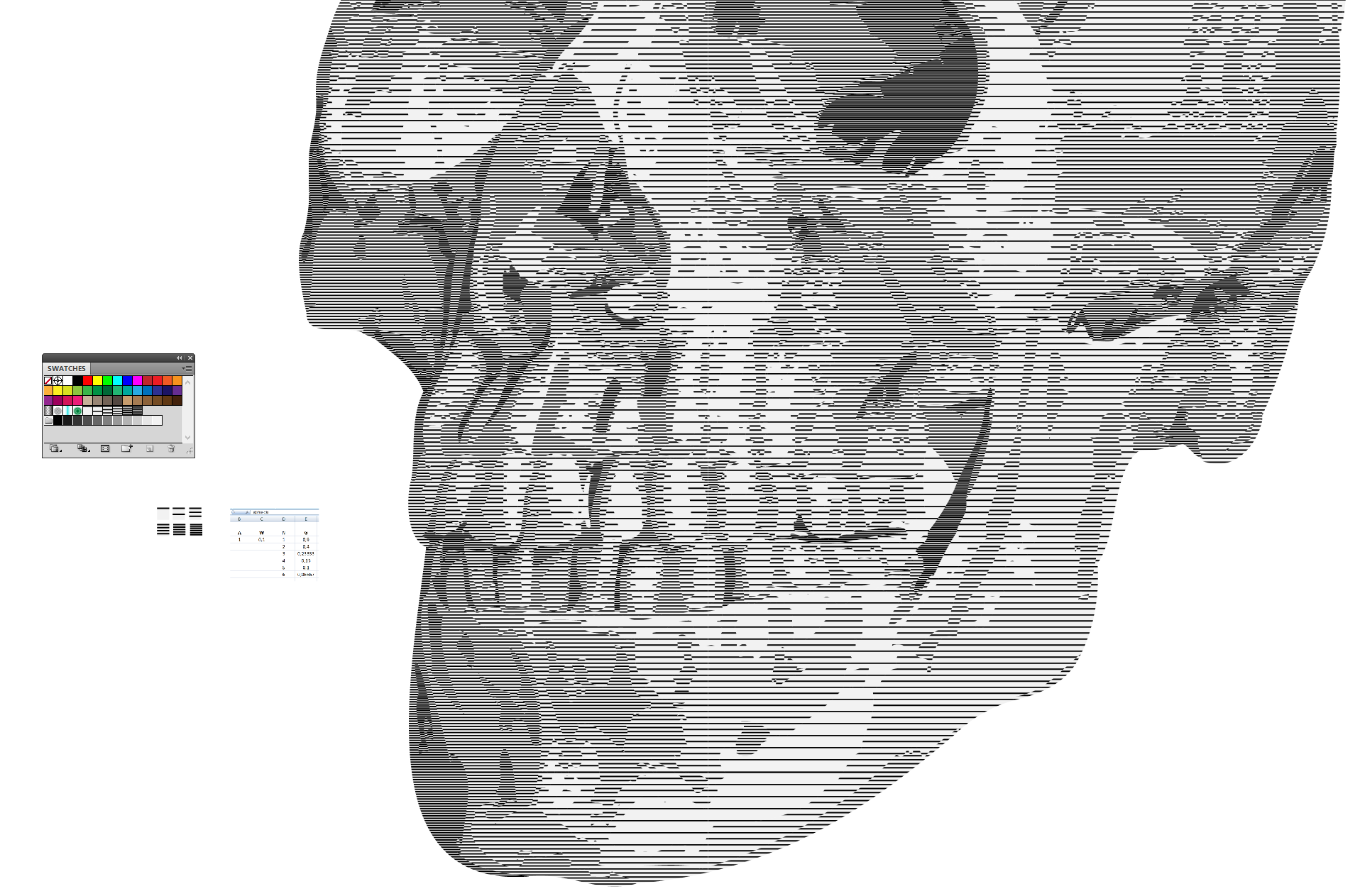 More zoom in shows that all lines really are there: 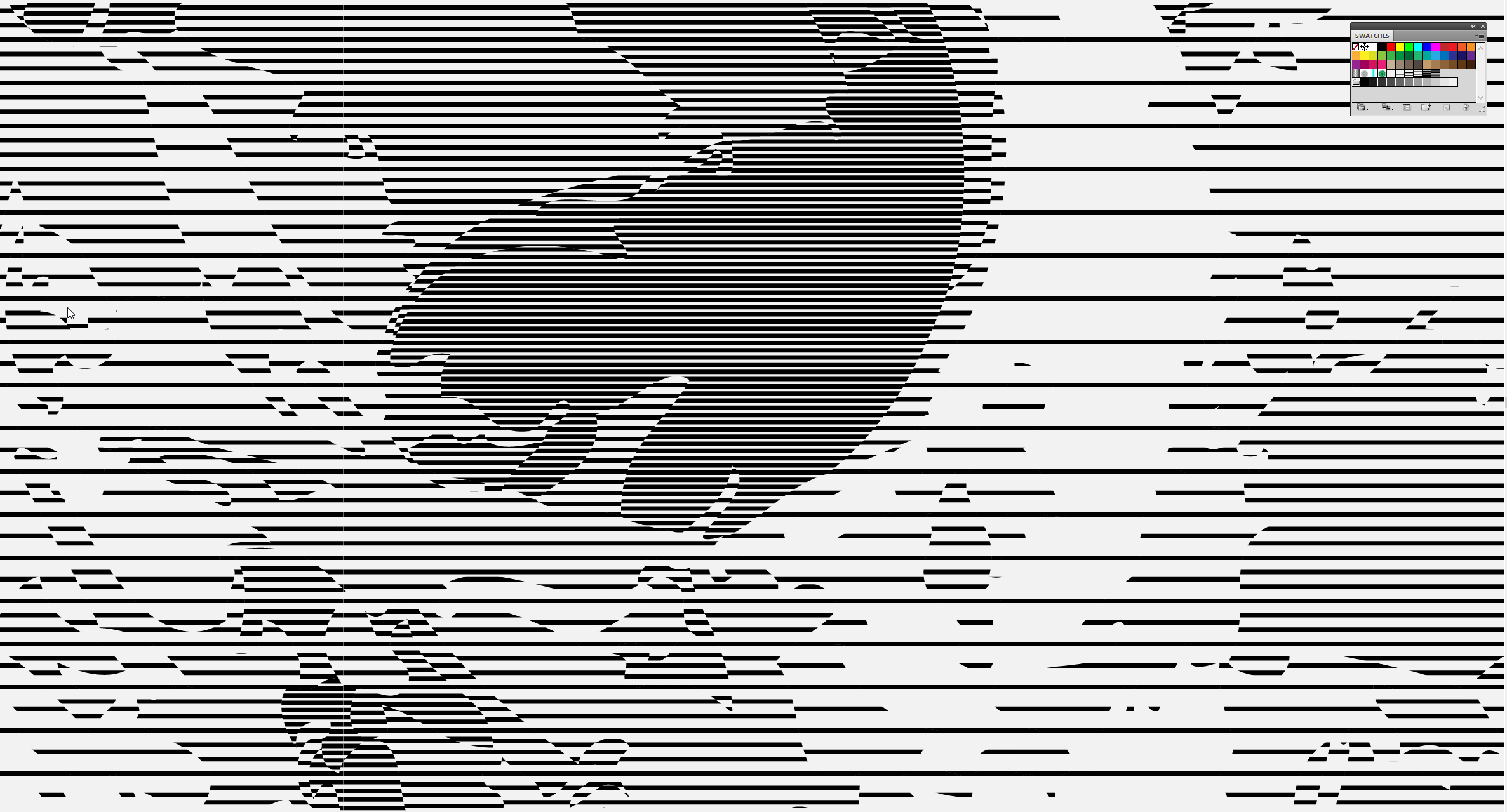 If it must be visible on the screen as a whole with low interference, we can try to reduce the resolution by making the pattern swatch shapes bigger. It's easy in Illustrator. Select all, apply Object > Transform > Scale > Only patterns > 300% uniformly That scales lines substantially wider than the screen pixel if we also zoom in as much as the screen allows: 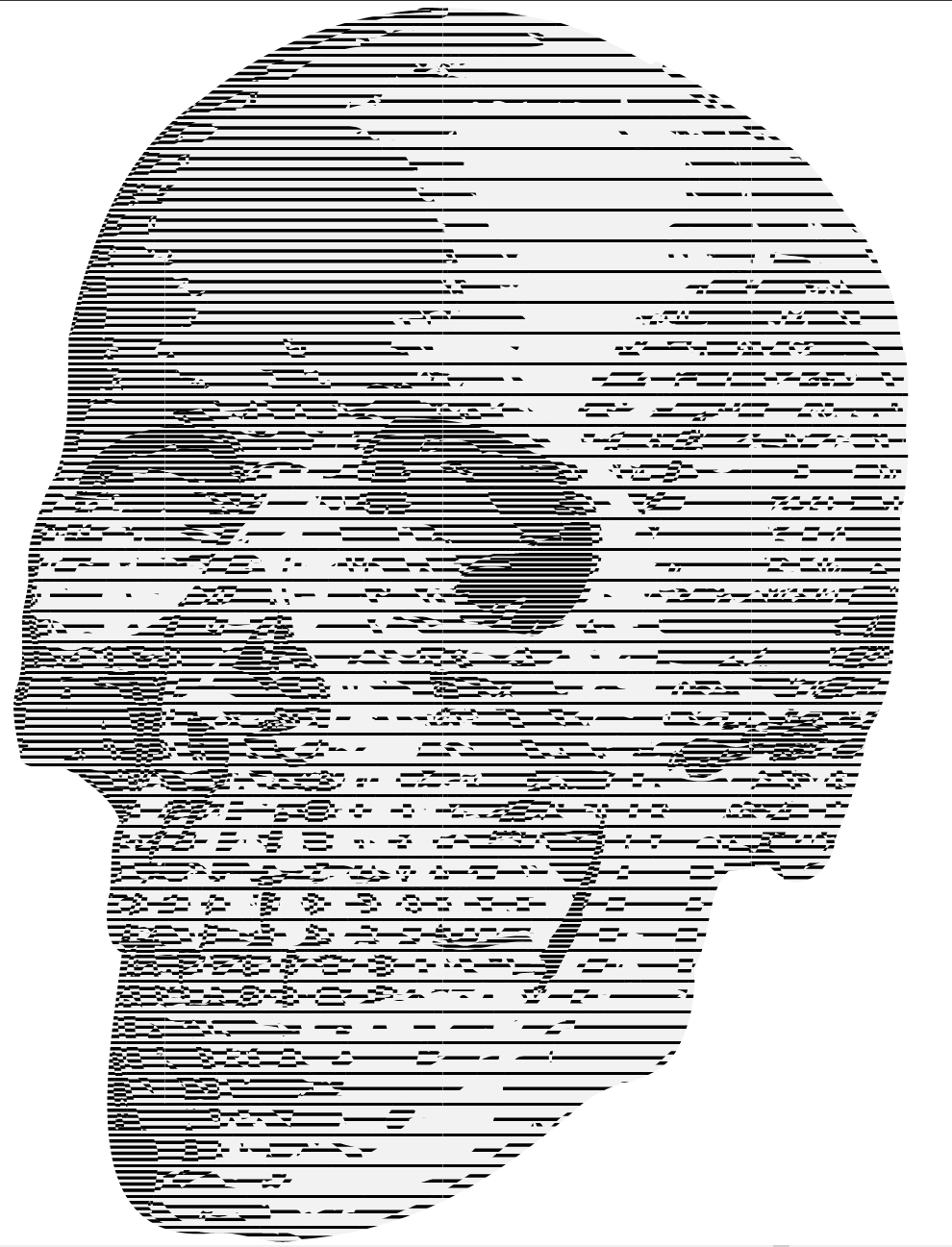 It's not as bad as one could expect, because there's still all horizontal resolution of the original image left. The used line halftoning and scaling reduce only the vertical resolution.

You can fade the grey on the background either by changing it white or transparent before dragging the patterns to the swatches or afterwards by selecting all and recoloring the artwork.

As said, this method can be seen as a sample of bovine work. Hopefully we can see something more clever from others.

If you simply want something quick and easy (and raster)...

AlphaPlugins offers Engraver II for Photoshop. This can somewhat be done quickly with their plug in...
(Note: I have no affiliation with AlphaPlugins.) 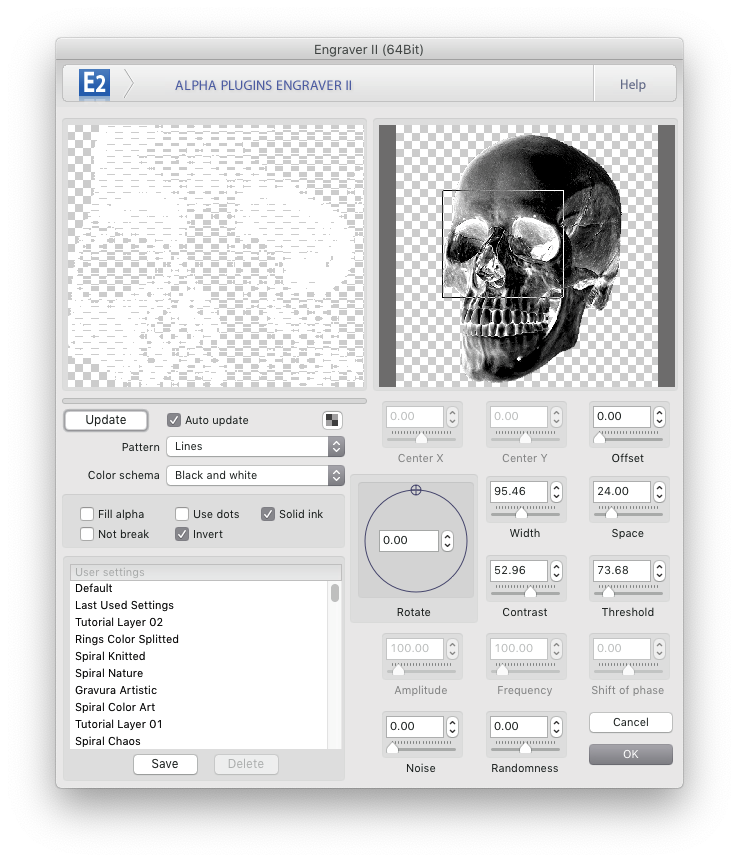 The result is white... 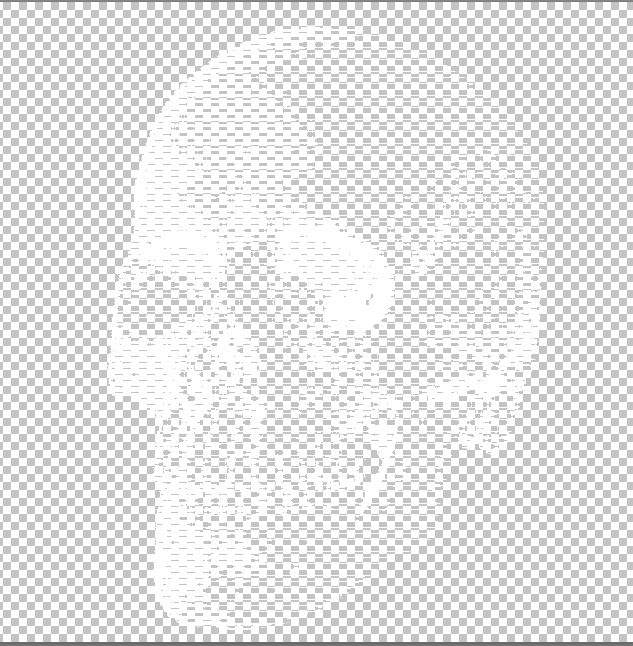 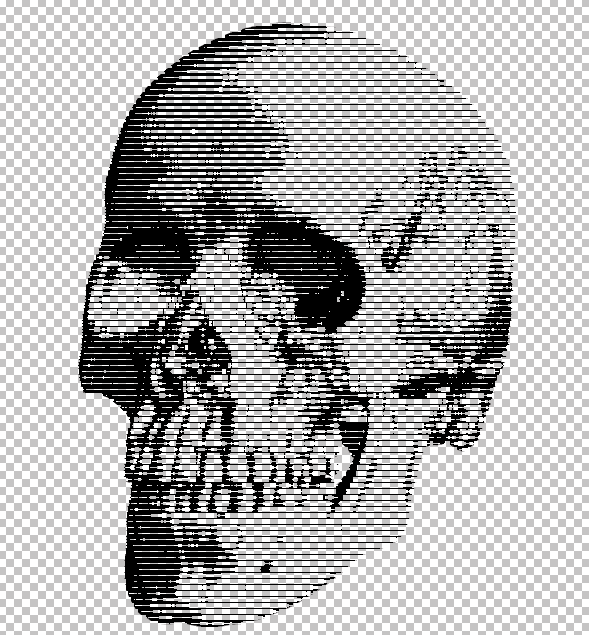 If you want precision (or vector)....

Be aware.. By no means an I suggesting this is a "quick" or "easy" method. This takes manual effort and time to get correct.

First place the original in Illustrator, merely to use as a guide, and lock the layer. (Any vector app will work.)

Draw a simple line grid on a new layer above the image. This grid will be the lightest shade of grey in the image, i.e. shade 1... 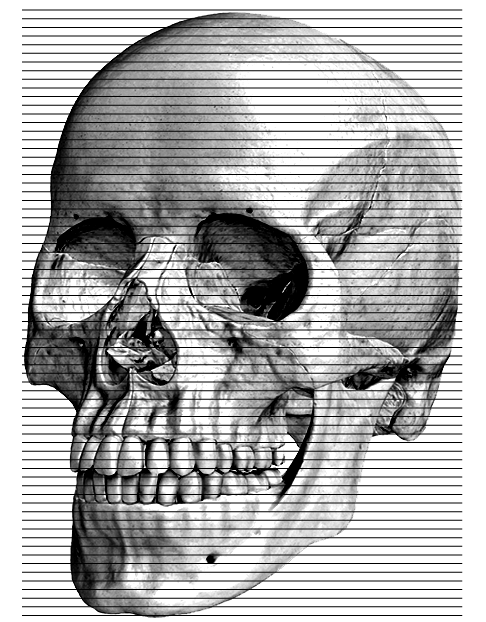 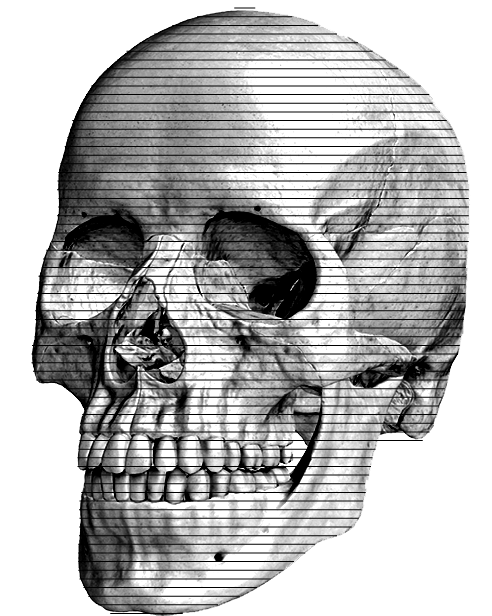 This created the "base" tone - or the lightest shade after white.

Remove portions to achieve white areas (I used the Eraser Tool in Illustrator - meaning I just selected the paths, and "brushed" over areas I wanted to remove.) 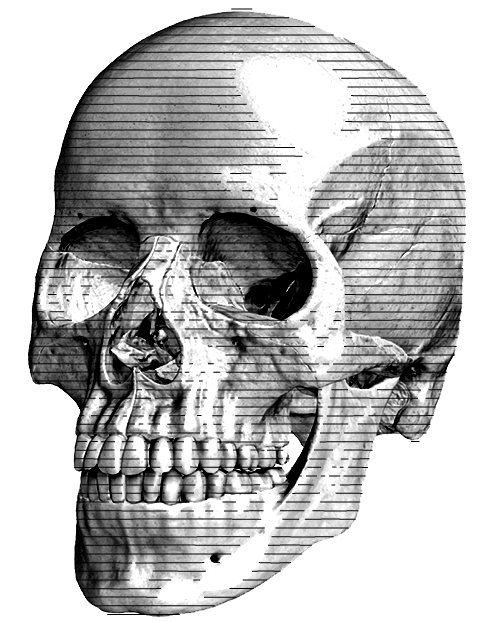 Select all the paths, and duplicate them while also offsetting them half the distance between the existing paths. Keep these duplicates selected. And again remove portions from these offset paths, but this time leave paths in areas you want slightly darker than the previous areas... this would be shade 2. 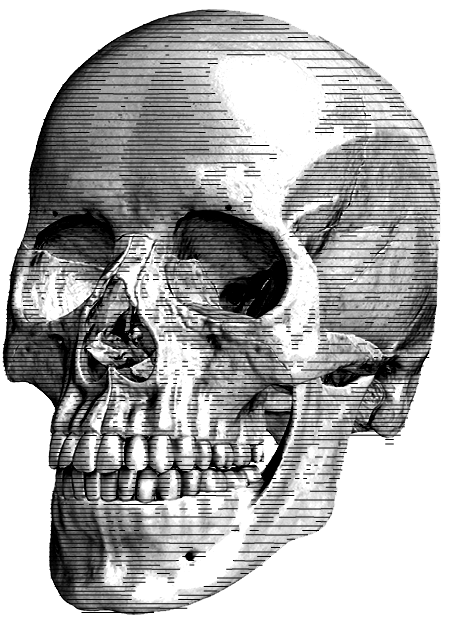 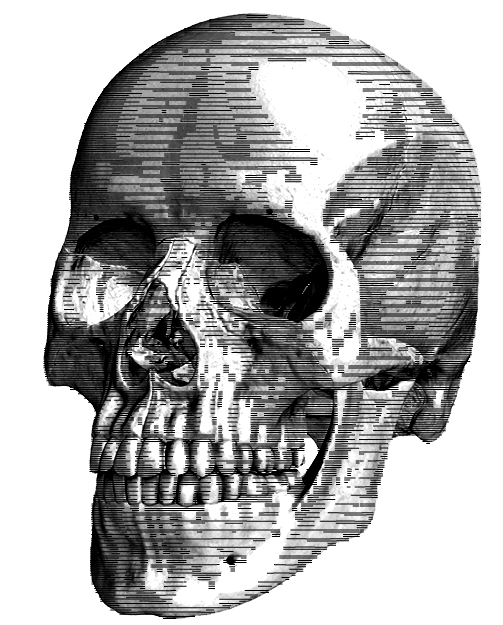 Keep repeating until you are happy with the contract and tonal variations. 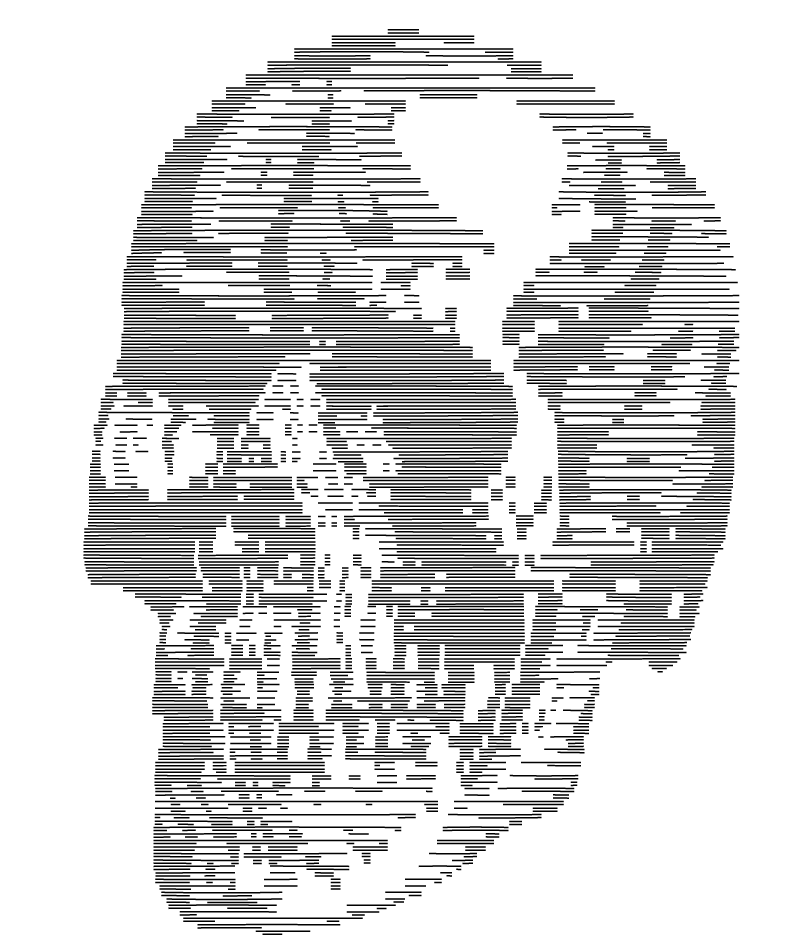 I only did 3 steps above and you can start to see some definition. All the paths are just parallel 1pt black strokes. Thinner strokes and more steps will create more definition. I also wasn't overly precise when removing paths.. the more precision you use the better the end result.

2
Create engraving in GIMP/Inkscape
2
How can I create a halftone using rough lines?
2
How would you go about making these sorts of textures in Illustrator, and what is this style called, specifically?

3
Illustrator dropshadow with some distance
4
Transform many squares into circles
2
AI: How to turn blotchy lines resulting from an image traced illustration into clean geometric lines that look good when zoomed in
6
How can I create a pattern of parallel lines that are increasing in distance in Photoshop / Illustrator?
4
How to make parallel dashed stroke lines?
0
Illustrator: Merging lines that run parallel within a given distance
1
Illustrator diagonal lines into straight lines