How to double your brush in Photoshop?

I was watching a photoshop tutorial, which was created using Photoshop CS4. During the tutorial the instructor split his brush into two brushes side by side (using a keyboard shortcut I believe).

Does anyone know how this is done in CS6 or what the name of this tool technique is called?

Here is an image for reference, showing the double brush (slightly overlapping each other) after it was instantly switched from a single brush. 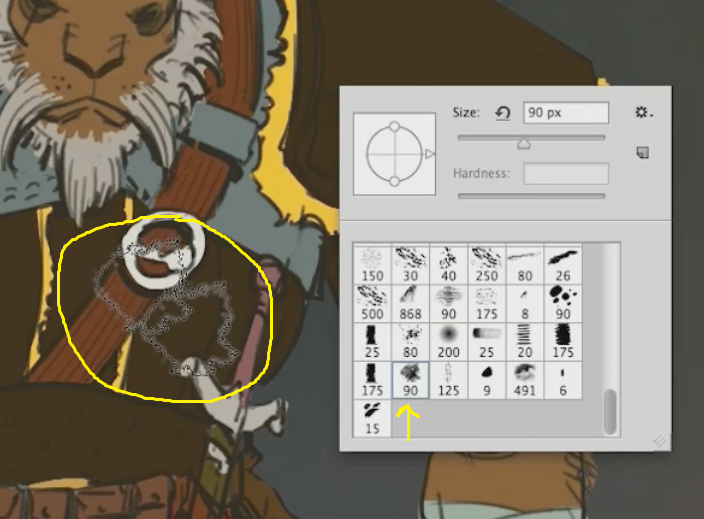 Here are two more photos. The first shows the single circular brush, then in the next frame of the tutorial, it instantly became two overlapping brushes. Could it be that the size of the brush affects the shape? Like if the brush is less than 80px it is a single circle, but over 80 it becomes two overlapping circles?

1) Its called dual brush mode. If you open brush options (press B to select brush tool, then top left of screen you see a brush icon and your brush type, next to that a small folder with three brushes sticking out, click that - or alternatively in the top menu window>brush). You'll see the dual brush mode setting in the options pane. Go experiment with it.

2) In that same pane is a tab called 'brush presets'. It contains a ton of brushes. It's hard to say what the exact brush is in your image.

Now about that brush settings pane. You can alter a lot of options for your brush, wether it repeats itself, is pressure sensitive to a pen tablet, scatters, etc. Just experiment with all these things.

It could be the dual brush mode but I don't think that is it. Dual brush mode only applies to merging two separate brush effects/patterns into one stroke. To me it looks he just made it have two output points when making a custom brush.

Is there any way you could pull a gif of it in use painting? That would help to see how it behaves and know where to go from.

I not sure how it is done in the video but using a tablet or another device can show two cursors on the screen. Also, some devices support various functionalities based on the pressure on the pen etc. This could be related to the device used.

2
Replace artwork while retaining (extract) the reflection, specular highlights and texture of a metal surface
3
How to make full color brush in photoshop?
0
Photoshop brush darkening and lighting
4
How to Krita - Creating user defined pixel brushes to match Ctrl+Paint
1
How do I change the defined brush in a Photoshop brush preset?
2
Photoshop BRUSH : Need a LONG, THIN, rope brush
0
Photoshop - How to choose a brush compatible with your selected tool