Are you allowed to use a warning sign as a logo or is this copyrighted? 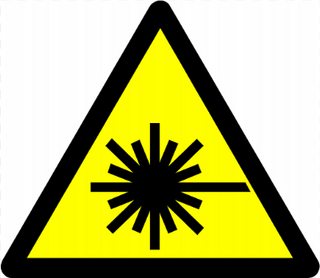 Is it even allowed to use such signs as a logo, or are these copyrighted somewhere?

The warning symbol is part of the ISO 7010 standard as such its normative in many countries. This standard relies on ISO 3864-1, and ISO 3864-3 for further information about colors and sizes of borders etc.

This probably means at minimum that you lose the unique ability to trademark that symbol. Also while you may in some locales have a copyright on the electronic document you created you will not be able to get others to stop from drawing the same thing again. But most likely you have no copyright.

Note the standard does have images for illustrative purposes and many signs use the exact images*. However please be aware that, to my knowledge, the warning signs do not require you to have the exact same design to qualify just fulfill the text in the description field. To this end iso says:

However some degree of graphical modification is permitted when cultural differences or special application formats need to be considered, provided the original meaning is retained and comprehension of the safety sign is maintained.

THis in turn means its extremely unlikely to win any plagiarisation claim in court. More likely your plagiaraising ISO. Because people can just claim to have followed the description in the standard, which is what its intended for.

I would say you might be able to hold it as a trademark in your niche (you better not make lasers or laser accessories, because you could never hold the trademark there).

So for instance if you formed Remaining Eye Records which mostly focuses on EDM... and all your LP centers had a stylized version of that logo... And you got established and known in the industry... And Straight Records tries to use the same logo, no problem getting a "knock it off" order even if Straight Records is a classical label.

But if Ruby Red Jewelry used the same logo, you'd have to strongly show that customer confusion is likely owing to targeting the same demographic, sold in the same shops, etc.

Nonetheless, this is a bad idea precisely because it's so un-unique qnd obvious: you are going to have collisions like this. How do you know you aren't Straight Records, arriving second to the party? How do you head off Ruby Red Jewelry's before they happen?

And ISO might have some concern with you "diluting their mark" - like happened with the skull and crossbones poison-warning label. So when they copyrighted Mr. Yuk, they decided to defend it strongly so a soft-drink maker doesn't use it.

But the laser mark is to protect people working with lasers, which isn't everyone. Similarly you see a lot of the nuclear mark used ironically. So a judge may not agree with their concerns of mark dilution.

Not the answer you're looking for? Browse other questions tagged logo copyright or ask your own question.

6
How do I know which images are copyrighted and not?
7
Is it legal to use copyrighted fonts without a license for non-profit projects?
3
Are flat icon and logo design considered inside the same set of skills?
3
Using Apache 2 Licensed fonts in a Logo
14
Why are circles used to draw a logo?
3
Are you allowed to use another company's logo for a graphic design project?
3
What is considered a “Logo” for stock photo use?
2
Changing the color of Certification Logos to match the theme colors of my website
3
The use of iconic figures in a logo