How to Export Layers to File but take into account the Adjustment Layer's Tweaks?

I have document with 5 layers, each of those layers are are full of different colors. I want to essentially export the Desaturated versions of each layer. I got past my first hurdle (which was how do I apply an affect on all layers at once by creating an adjustment layer). But now when I tried exporting those layers to files, the adjustment layer's affect was not added.

I've read similar answers where you'd have to either create a custom script file or or an action scriplet that would apply this change to files in a folder. But I'm really surprised that there's no standard option that would say something like:

Does this exist under a different set of rules or will there still be a manual process involved like I've read in other threads?

Save each set up as a Layer Comp. Then Save Layer Comps to files.

To create a Layer Comp, merely toggle visibility of layer(s) on or off, then create a New Layer Comp via the "new" button at the bottom of the Layer Comp Panel (Window > Layer Comps).

Do this for each change in visibility you want to save as a file. 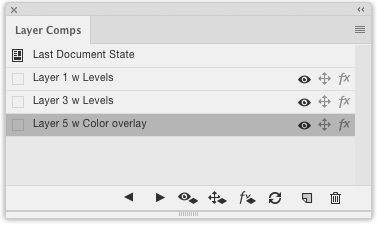 The end result of the export will be 3 files from 3 layer comps all with the same visibility you see when those layers are visible in the Layers Panel.

Layer Comps are composite images based upon visibility of the exiting layers. They will export as "sets" containing all visible layers (adjustment or otherwise) rather than individual layers with an adjustment.

Layer Comps can also be used to "quick toggle" visibility sets in the Photoshop file. With only one click on a saved Layer Comp and you can change the visibility of many layers.

1
How to export groups to separate PDF files in Adobe Photoshop?

2
How to export multiple layers as an single image file? [PSD]
21
Is there a faster way to save all layers in PSD to PNG?
2
How to automatically save alternating layers and one set background layer
2
Automate Export to Layers without overwriting
4
Adjustment layers do not apply after merging layers. Why?
3
How to duplicate adjustment layers from one file to another for batch processing?
3
Any way to export layers to files WITHOUT a prefix, short of editing the .jsx file?