How do I export a PNG image without alpha channel in GIMP?

I have checked a lot, but I can’t find this. I found an option to export PNG images without alpha channel in Inkscape, but I am not familiar with that program.

Also, is there any way to check whether an image has an alpha channel in GIMP?

In GIMP, alpha channels exist per layer. If you go to the layers dialogue (Ctrl+L), right-click on your layer, there is an item Remove Alpha Channel, which does what you want. If it is greyed out, your layer does not have an alpha channel.

To check whether an image has a alpha channel, you can have a look at the channels dialog in GIMP: 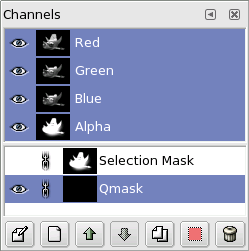 Having the RGBA image components in this dialog together with the other channels (think: selection masks) is not absolutely correct. They behave significantly different from the other channels there, but this is like it's ever been and nobody has changed it yet.

This is actually an annoying problem in Gimp; I often find myself having projects with multiple layers, but with a bottom layer without transparency, so having an alpha channel on the final exported image is a complete waste of space on that. Gimp doesn't seem to detect that final lack of transparency, though, so when I export to png, it always ends up containing an alpha channel.

The best solution for this seems to be to either use the "Flatten Image" function before exporting (available in the right-click menu of the Layers dialog, or just in the menus under Image), or to just export the image, then open the exported file (it'll be easily accessible in the "Open Recent" menu), and then removing the now-single layer's alpha channel and using the function to export to the same filename again.

When working with Gimp xcf projects I generally prefer the second method, since it means there is no risk of accidentally saving your flattened project and losing all your layers.

3
Reverse-engineer alpha channel
3
Gimp 2.6.12: modify alpha channel while preserving color
1
Gimp, OSX: PNG file seem to be saved without the alpha channel
1
Print a .svg document without a black background on imported image
0
Remove alpha channel from exported .tiff using GIMP
0
Gimp, “Color to Alpha” displays transparency in preview but not commiting change?
0
Adding a black-white mask image as an alpha channel to other image
0
Exporting Image to PNG causes it to be semi-transparent