How to automatically batch export with name+subgroupname in Photoshop CC

I have a PSD file which the designer draws textures for a game character.

This file has group folders such as hair, eye etc.

In each group there are other group folders named with numbers such as 1,2,3... which keep each item's line and color layers.

So this is how it looks: 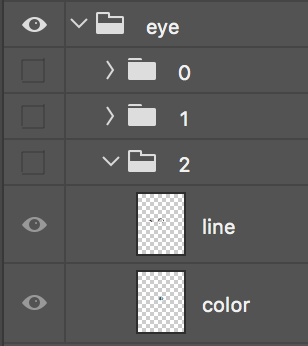 I want to make an action which changes the color of a color layer (line layer will remain the same) in each subfolder and then export the subfolder (together with the line layer and color layer) into a .png file, and automate the batch exportation of each item in a folder with the naming convention used [topLevelGroupName][subGroupName][colorName]".png"

You automate this with scripting, not actions, because you will need variables. You can just loop through the Layers panel and export everything.

You can write scripts in AppleScript or JavaScript.

Simon WhiteSimon White
1,94755 silver badges1313 bronze badges
0
Add a comment  |
0
Want to improve this post? Provide detailed answers to this question, including citations and an explanation of why your answer is correct. Answers without enough detail may be edited or deleted.

Not the answer you're looking for? Browse other questions tagged adobe-photoshop automation batch-processing save actions or ask your own question.

3
How can I use “Save For Web” in a Batch Action and save new files in their original files folder using Photoshop CS?
0
Photoshop batch/mass save for web
3
How do you batch export in Photoshop using "Save As" commands and still have unique names?
5
Image project with multiple selections, export to separate files
1
Automating the export of layer combinations to a range of JPG files sizes (Photoshop)
1
Photoshop: Export layers in multiple PSD files to PNGs?