I am trying to create a transit map using round corners, both 45deg as well as 90deg angles.

Now, I know I should have used the pen tool initially, but I didnt. I used the line segment tool, then I joined all the individual line segments of the track, and rounded corners using Effects > Stylise > Round corners.

After this only half of the corners were rounded, which I found weird.

In the screenshot I have circled the round corners in blue and the ones I couldn't do in red. 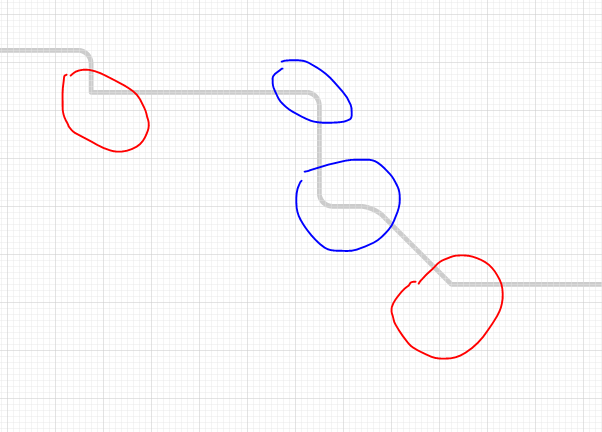 The old rounding tool was broken, used by the effect, it can not round over a segment and it didnt allways do correct rounds.* So if your curve has 2 overlapping points in that place it will not round. Also if you have 2 separate curves they will also not round.

Not the answer you're looking for? Browse other questions tagged adobe-illustrator path maps corners or ask your own question.

3
target specific corners for rounding
1
Geometrically correct line drawnings: curves, angles, cusps and other edges
8
How to join two overlapping non-end points that belong to two paths?
1
How do you combine two paths into one, or is there a better way to draw this shape?
0
Using inner and outer curves to create an icon
0
How do you divide a rounded rectangle using pathfinder using Illustrator?
0
Expanding strokes leaves corners deformed in illustrator cc