I came across this work (unfortunately creator unknown, please let me know). It looks like it is done in Adobe Illustrator. Is there any body out there which knows how to create this effect? 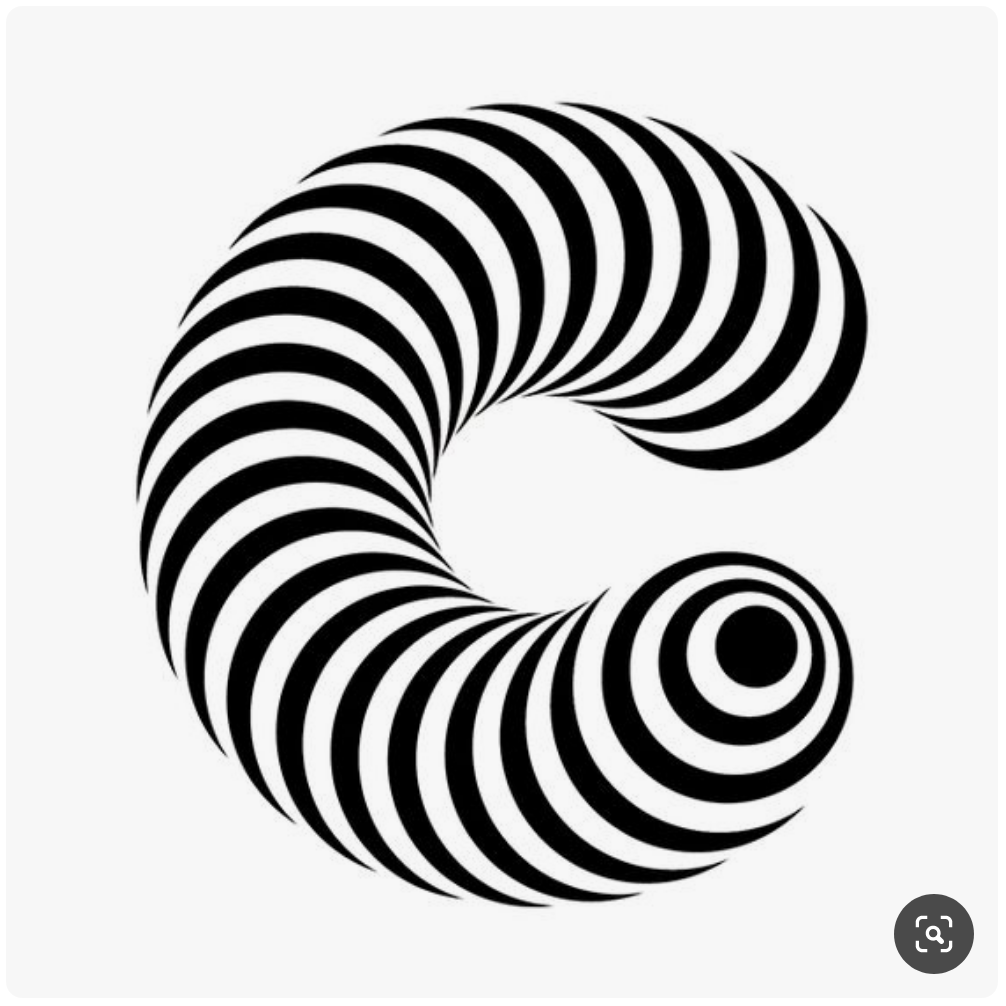 This is what I've tried: 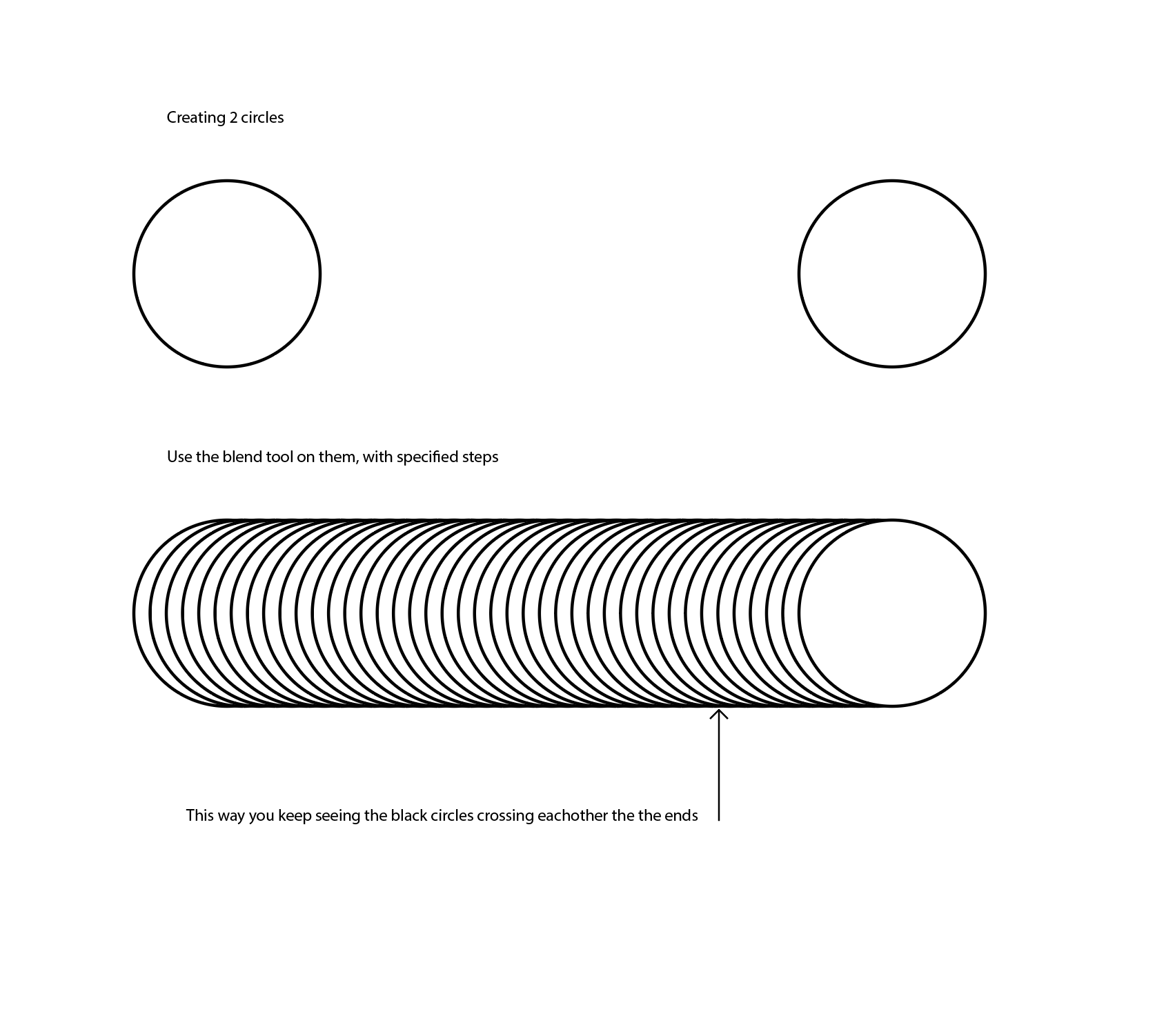 The simplest way is to:

It would be easy to say: Get 3D! That subject is discussed in the end.

But actually this can be done in Illustrator or at least it's possible to make something resembling. Blending can be used as you have guessed.

Blending grey disks with a black stroke AND inserting a curved spine gives this: 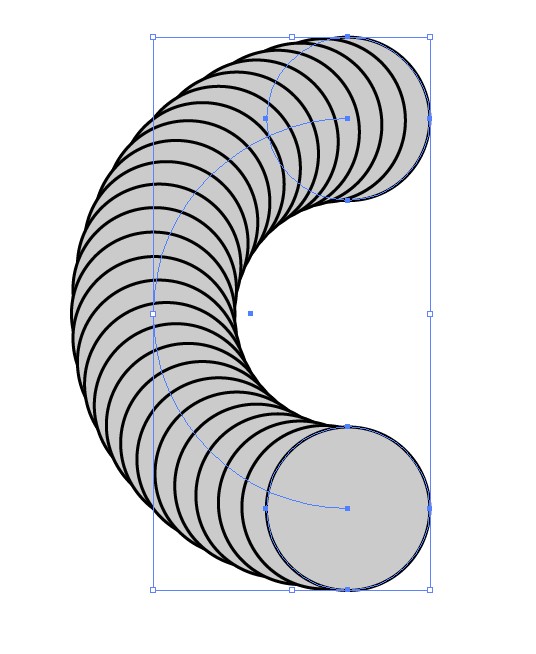 The curved spine must be circular for apparently uniform cylinder curvature. I used only a half circle, but your example has more, nearly 3/4.

The stroke is actually needed only to show the borders of the pieces. Make it as thin as possible, but you can still see it. It helps the actual coloring. I thinned it soon because it covered too much.

With shape builder one can fill half of the grey areas to white after the blend is expanded and ungrouped. Filling is a slow job because there are so many crossing curves, but it creates the white belts as individual objects. Select all, click the shape builder tool, select fill color and paint over areas which belong to the same belt.

The shape builder is destructive tool. Fix an error immediately with Ctrl+Z. 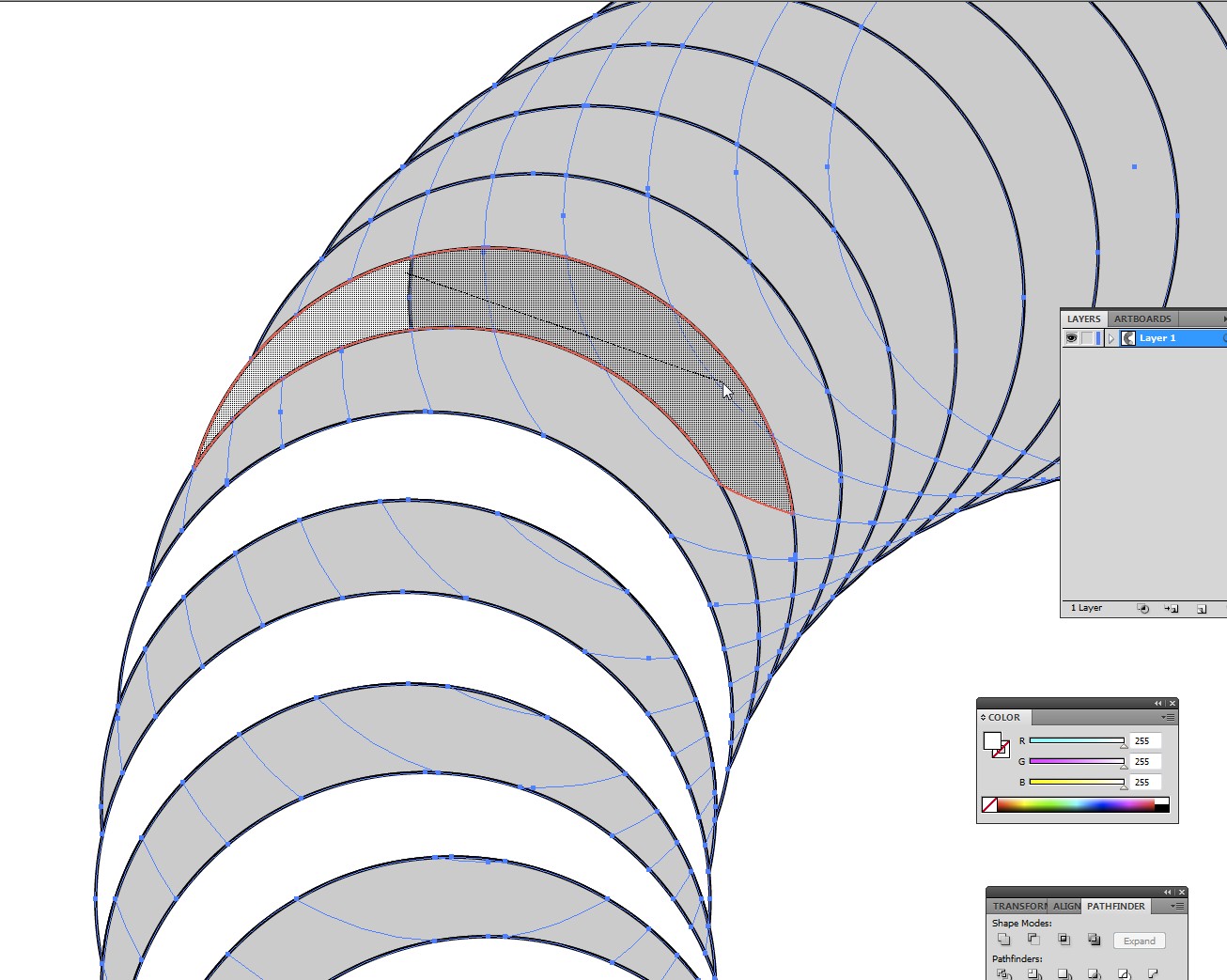 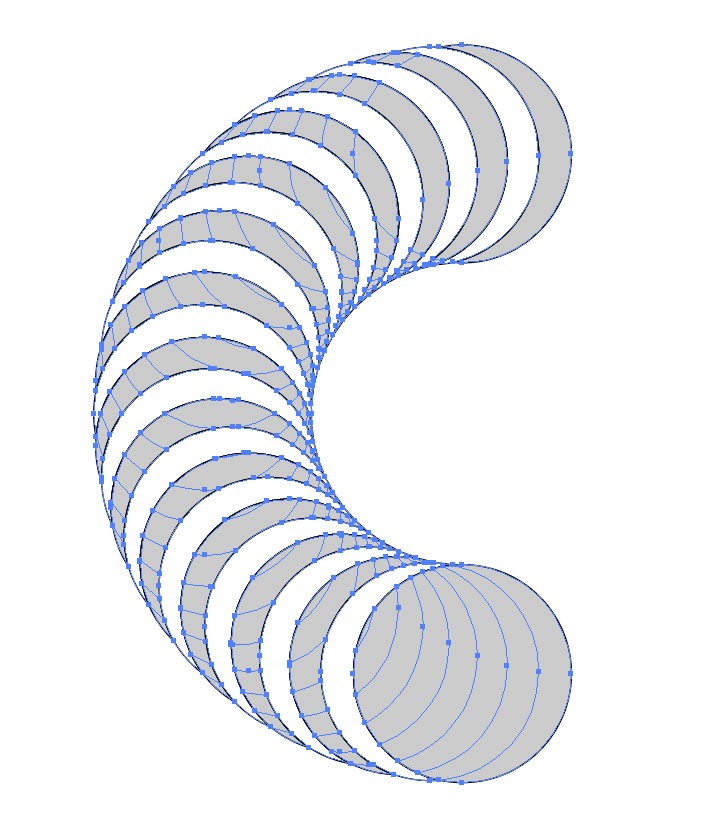 Actually also the grey areas should be united to belts, because you may want to recolor them. That fortunately is possible easily with the pathfinder panel after all white belts are ready. Select one grey piece, goto Select > Same > Fill color, Click Unite in the Pathfinder panel, Ungroup. Select a color for the grey areas and remove the strokes if you do not want to keep them. My white belts have a thin stroke for better visibility on the white artboard. 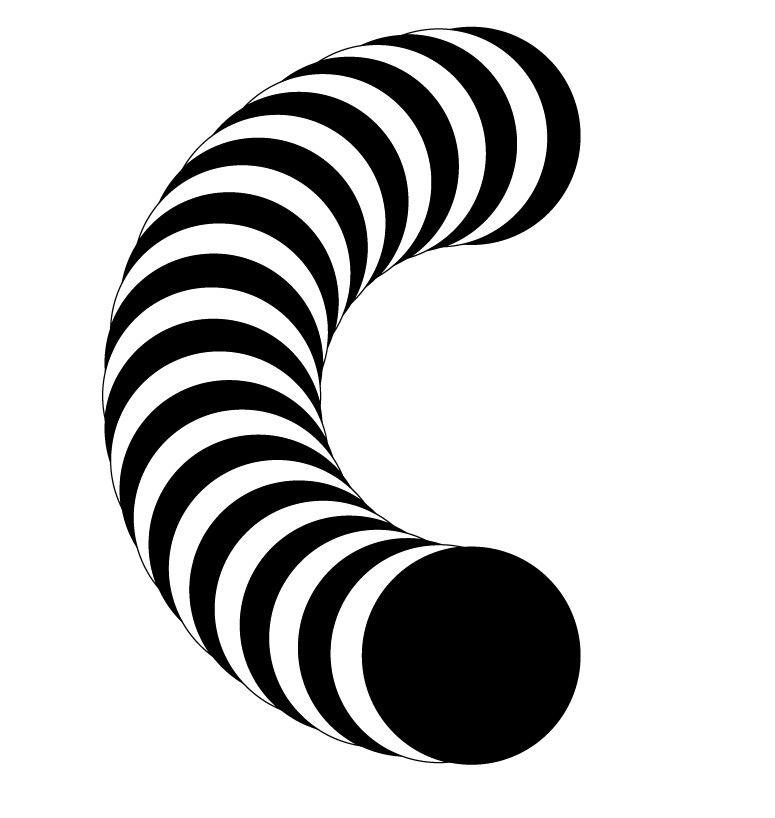 Finally one can draw a couple of white rings to the visible end and insert a background, if that's needed. I haven't it. 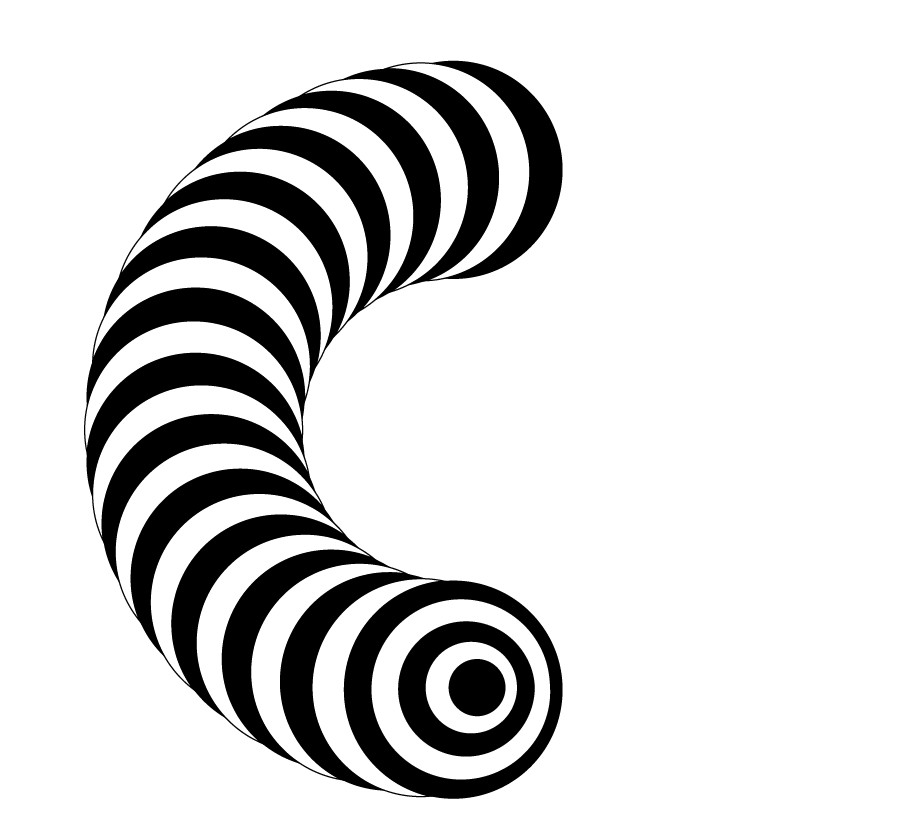 The rings cannot be exactly round nor uniformly wide if you wan to imitate a rounded end. I applied the stroke width tool to a couple of circles.

The final shape could have slight gradients instead of pure black and white to make it more 3D-like. That's called "shading". It's often a substantial percentage of the work and needs much practicing before the eye starts to see what's needed.

In 3D there's several possible ways to build this shape. For example one can extrude a circle along a helix curve to get the curved cylinder. Doing it in pieces generates the separately colorable zones. The rounded end can be an inserted half sphere which is splitted to separately colorable segments.

Another possiblity is to tile short straight cylinders + a spliced half sphere along a line and map the whole geometry in a way that the straight construction axis is mapped to a piece of helix. It's tried here: 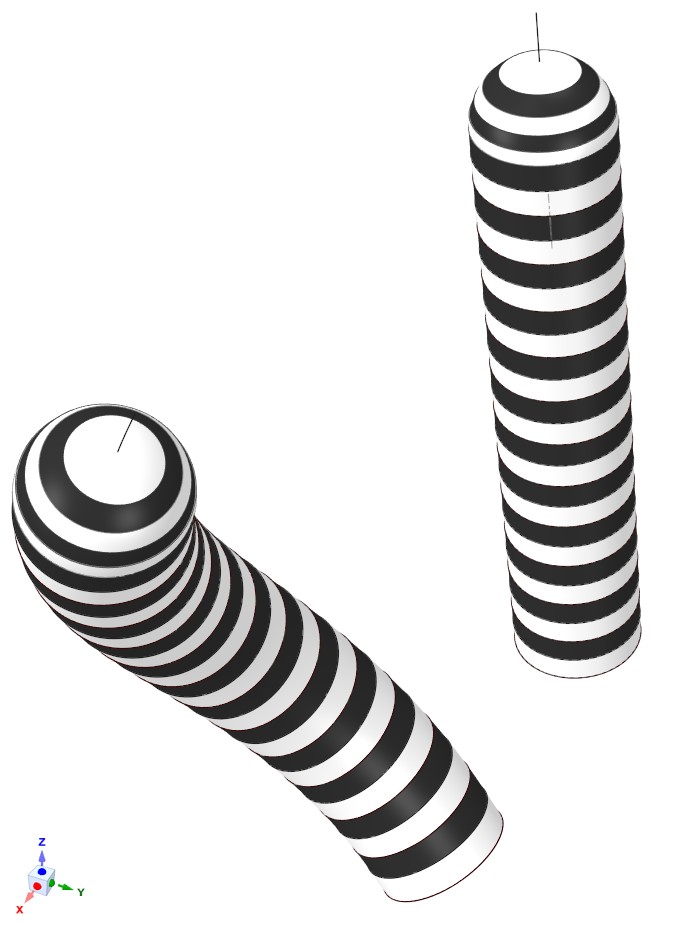 When watched along the rotation axis of the helix (Z-axis) the mapped version looks out this: 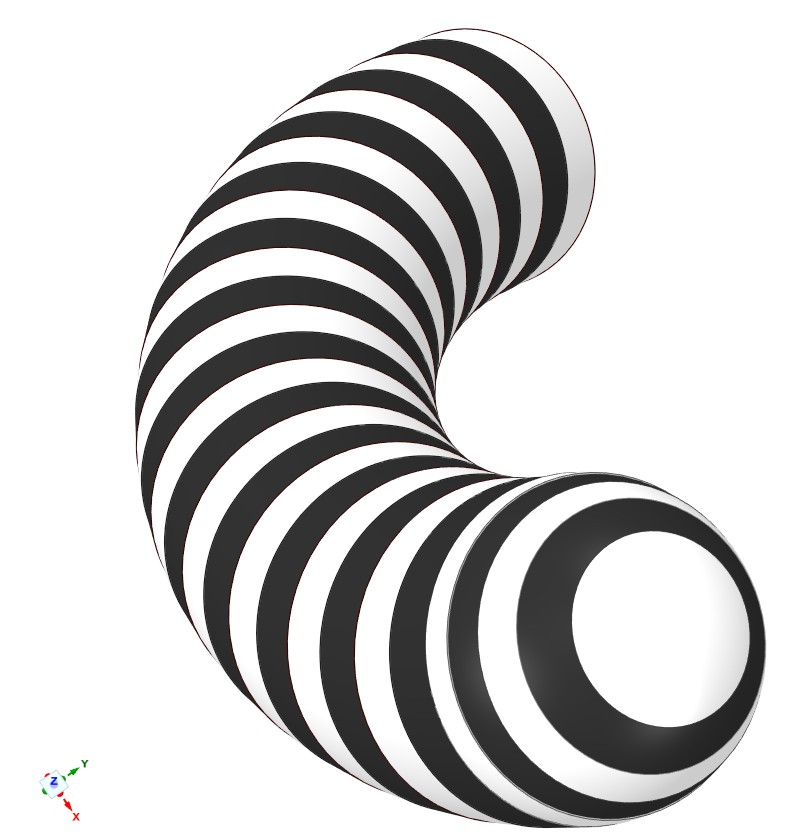 The result differs from the one which is made in Illustrator. In the 2D image the slices aren't circular. Their watching direction changes, so all slices look out differently elliptical. Illustrator made all slices circular. In addition the 3D program generated shading and perspective. Without the perspective the distant end looks out thicker.

A detailed 3D receipe is beyond the scope of this answer.

Not the answer you're looking for? Browse other questions tagged adobe-illustrator illustrator-effects or ask your own question.