With Irfan View, how can I remove yellow tint?

I'm useless on computer. I paste this answer

I got no idea what these words mean! What buttons do I click on? 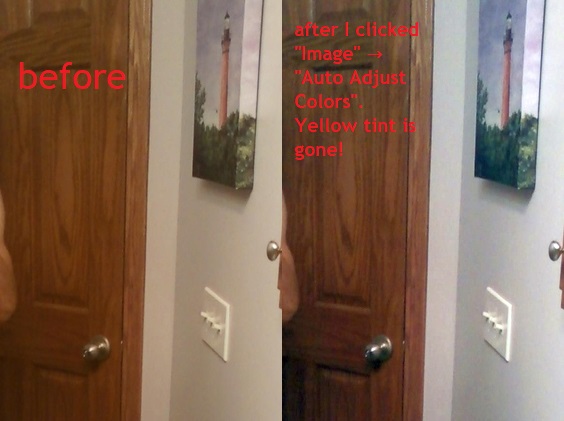 The image looks yellowish because there's less blue than red and green at the pixels which should look white or at least colorless grey. This is common result if one takes a photo in yellowish indoor light, but the camera assumes the light is less colored. There's color temperature selection in many cameras for giving a hint to the camera how colored the light is. As common is the case where the image is blueish because the light comes from the sky, but the camera assumes it's yellowish "low color temperature" indoor light.

Photo editing software has often something which is named something like "Smart" or "One click" color fix or "Auto adjust". The program tries to find a new balance between R, G and B channels so that the image appears to have good contrast and there's no apparent color cast like the yellow in your example.

The red text in the image says: In IrfanView one must click menu item Image > Auto Adjust Colors to get what IrfanView can make in automatic fixing field

Hopefully you know that every image pixel has normally number values R, G and B in range 0...255. In the given explanation IrfanView is claimed to adjust R, G and B values separately so that in the image the darkest R value is set to 0 and the brightest is set to 255. The intermediate values are scaled proportionally between 0...255. The same is done for G and B.

This can really sometimes fix remove the color cast but as well the result can be unacceptably colored. The latter happens easily if the image has some brightly colored items. Better nearly automatic result is possible in programs which have grey point color picker. For too flat contrast the claimed fix in IrfanView can also be helpful, but a power user uses often something which is named Curves adjustment.

A photography master shoots his photos so that the colors and the contrast are good without adjustments, if possible. Unfortunately errors happen and sometimes one is in a hurry, there's no time to do tests nor change adjustments in the camera. Many of us use Photoshop's CameraRaw filtering to fix coarse errors such as the color cast. You simply point with the picker a point which is known to be colorless grey. Professional photographers have often a grey card which is placed somewhere to the image area when shooting. It's color brings to home the color of the light and the perfect correction is possible.

IrfanView as bare bones doesn't have "click a grey point" color cast corrector. You must install one or use the functionality which allows you to use Photoshop plugins (= 8BF type files) I must admit that the latter option is clunky, but I have seen it worked.

Here's one free "click a grey point" plugin which is made for 32bit Photoshop: http://www.westbrookjazz.de/filter/f0.html Take from there Jazzman's White Balance I. I have tried it, only remember to right click a wanna be grey point for correction. There's also commercial plugins which do the same +more. One quite advanced is made by PluginSite, its name is ColorWasher. Try Jazzman's at first, it has no extras for simultaneous other adjustments which could be confusing.

As said, both are Photoshop plugins, so you must in IrfanView have 8BF adaptation plugin installed and set the folder where the interesting 8BF plugins reside. Here Jazzman's White Balance I is applied to your image. 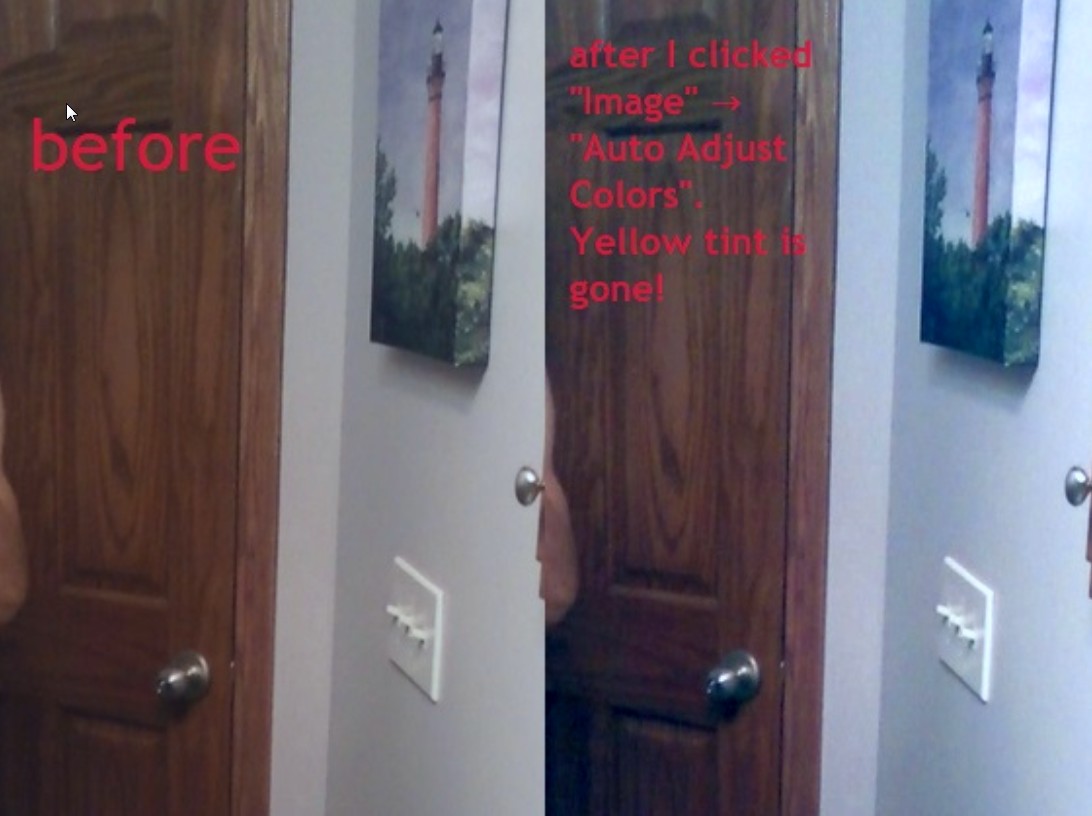 The clicked grey point was in the left side light switch. The left half is now right. The right half was already right, so it became blue.

how to do (with irfanview)

in my case 160 is just above at all the values. 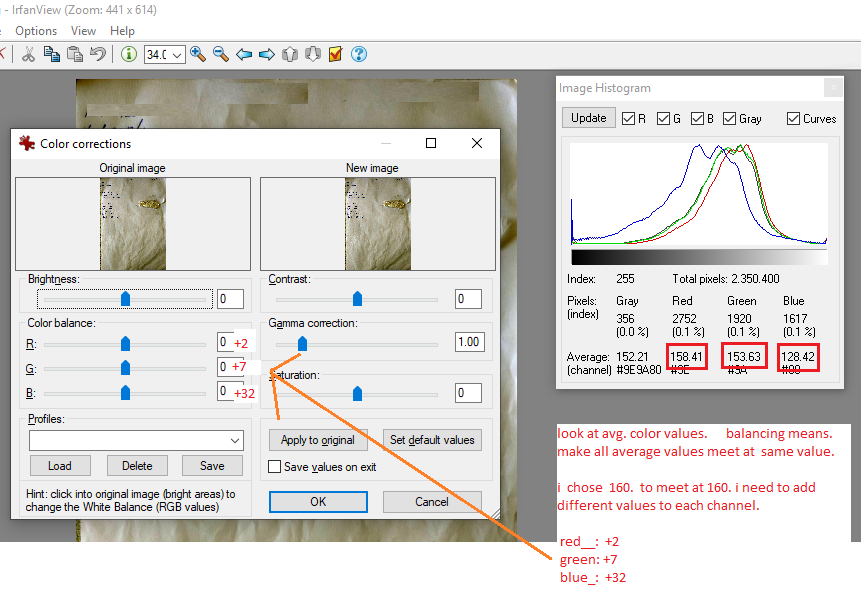 it causes color imbalances ,most of the time.

1
How can I see what Irfan View did to my original image?

5
How can I easily swap colors / swap channels in Photoshop?
2
How can I deglarify an image?
1
How can I see what Irfan View did to my original image?
0
How to tile an image with exact dimensions (any program)