Why does a font like Veneer slow down Corel Draw and InDesign?

I am using a font called Veneer. It works fine in Illustrator, but it slows down InDesign (2020) and Corel Draw 2019.

If I zoom in, pan, or move the text, the latter programs freeze for a minute before I can work with them again. It's the same if I convert the fonts to outlines and if I reduce the render/preview level.

Is there a way to speed it up?

Without having access to your computer, my best guess is that the font is slowing down your applications because it is a grungy font which contains many more vector points than ordinary fonts.

One of the advantages of vector graphics compared to raster graphics is that they don't take up as much disk space. The downside is that they need to be rendered again every time you zoom or pan your document. This can be very demanding if the graphics are complex.

Let's have a look at how many points a letter from Veneer has compared to a standard font like Times New Roman. In Illustrator I expand an "A" from both fonts and compare the number of points using the Document Info panel. 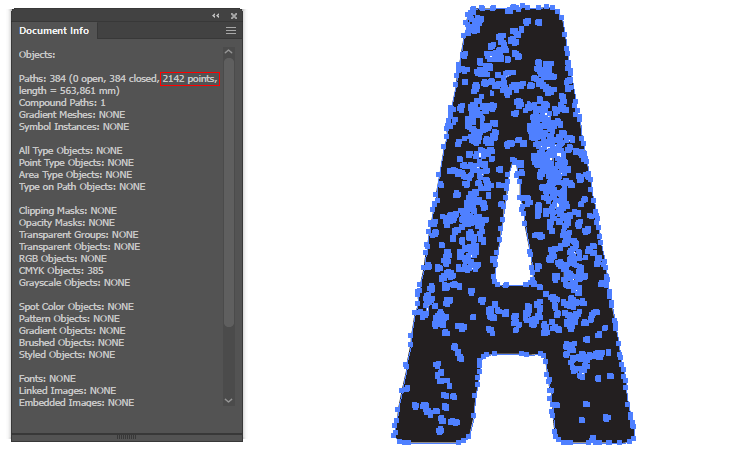 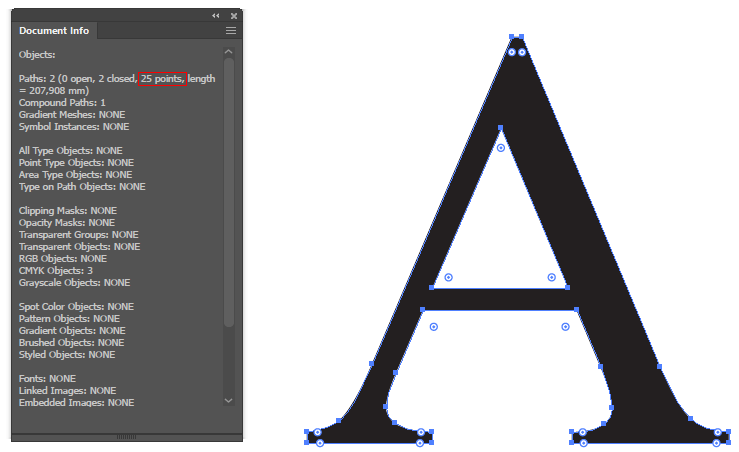 As you can see the Veneer "A" has 2142 points and the Times New Roman "A" only has 25 points! So Veneer has about 85 times as many points. Depending on how long texts you write, it can quickly become very heavy to render such complex graphics.

If you are set on using Veneer and you need the font to be editable, I don't think there is much you can do. Otherwise I can suggest some workarounds:

Not the answer you're looking for? Browse other questions tagged adobe-indesign fonts corel-draw or ask your own question.

1
Export InDesign CS5 file for Corel Draw
5
Is there any way to convert 'AI' and 'EPS' to corel draw format (.cdr)?
3
Scaling images down in InDesign and ppi
1
Perplexing Indesign font rendering issues
1
Gujarati font for Corel draw
0
From Corel Draw To InDesign