is there a way to clone and mirror at the same time in Krita?

Suppose you have painted a landscape with mountains and villages in the background, and you decide to put (lake) water at the bottom.

Now you need to reflect the landscape into the water.

The only solution I can think of, apart, obviously, from painting everything again upside down, is to copy the landscape layer into a new layer, mirror it vertically, maybe reduce the opacity a bit, and move it to its correct position.

However, when you have several layers it might become complicated to do this properly.

So I was thinking: would there be a way to do this using the clone brush, meaning cloning and mirroring at the same time?

As far as I can see, the clone brush copies whatever you reference exactly as it is, only translated by a given fixed vector, so the 'reference' circle moves exactly in sync with the 'writing' brush.
There is a 'mirror' option in the clone brush settings, and I tried activating it, but it does not seem to have any effect.
In theory, if one mirrors vertically, the reference circle should move horizontally in sync with the 'writing' brush, whereas vertically it should move in the opposite direction.

Just checking, in case I missed something or am not doing this correctly. 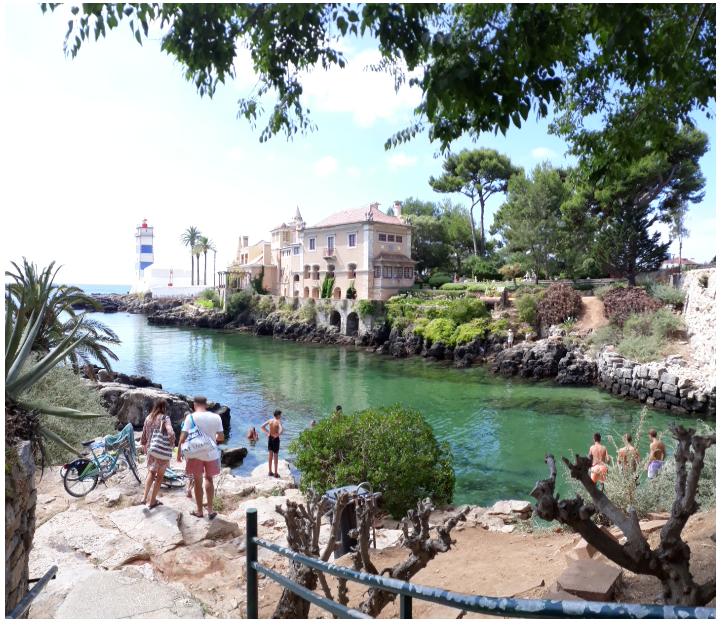 This was taken in Cascais, Portugal.

I understand the left side, where the water reflects most of the sky and lighthouse, as expected.
On the right, instead, you see much more of the seabed, especially where darker objects are mirrored.

It looks as if lighter objects 'cover' more of the seabed's own image, whereas darker objects allow more of it show.
This is particularly evident in the reflection of the two big dark arches under the pink house. The 'pillars', if that's what they're called, are lighter, and you see their reflection quite clearly in the water. The dark part in the middle instead is barely visible, and you can see the shapes of the flat rocks under the surface of the water.

Maybe the light coming up from the seabed and the one reflected by the surface are 'summed' or 'mixed' in some way before they reach the eye of the observer, so when one is much weaker (and that should be the case of darker objects) the other one prevails.

So... this would be a challenging one for me to reproduce. Maybe Krita's opacity settings would automatically do the light mixing trick. But I (still) don't fully grasp the physics of what is going on.

EDIT 2 duplicating and skewing the reflection

Suppose you have isolated the part of the image that is going to be reflected in the water: 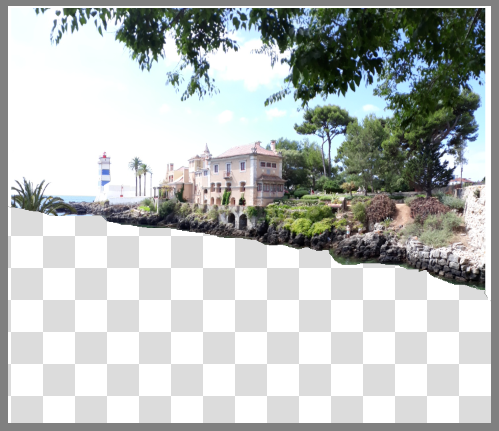 Now, if you only copy, paste it and mirror it vertically, the reflection clearly does not match: 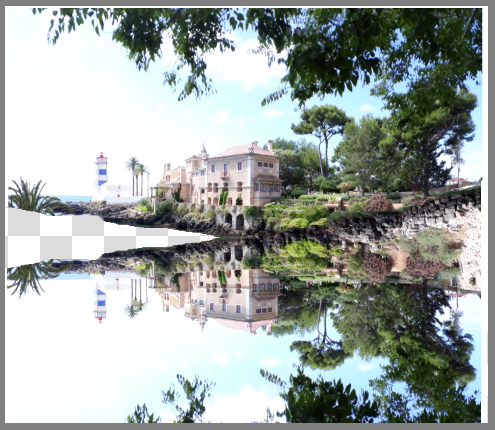 I'm thinking this may be because there is some perspective going on, and each object is actually mirrored by a surface that gets closer and closer to you.
I thought this was going to be very complicated, but then I tried a simple transform in Krita, the one with the two arrows, and it seemed to do the trick, together with some opacity reduction: 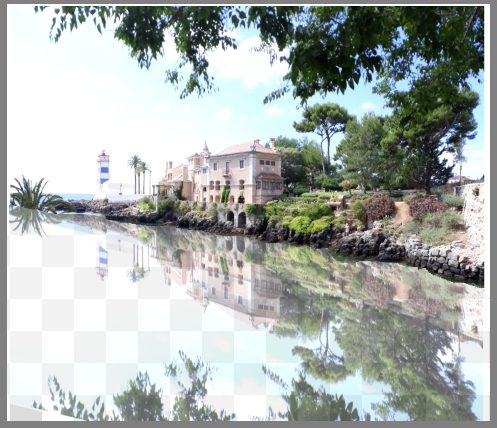 In theory, if I add the seabed image with its own reduced opacity, it will 'mix' with this reflection and make something convincing. Then the ripples, indeed as suggested by Billy Kerr. Obviously all this after painting the stuff :)

One thing surely goes wrong by using this method: the blue sea beyond the rocks on the left cannot possibly be reflected by the water on the observer's side of the rocks, as it is lower. Same for the palm leaves. The palm is in the foreground, so it would never be reflected on the observer's side. I guess all this can be fixed by excluding some parts of the image when selecting what to mirror... not super-easy, requires some thought; but it would be much worse without Krita!

I'm not a regular Krita user, but if I was doing this, regardless of which raster software I was using, I'd flatten all the layers temporarily, select and copy part of the image to use as a reflection. Undo the flatten, paste as a new layer, flip that, and move into position, and use a layer mask to make it fit the shape of the lake.

6
Lock the Zoom and Scroll Bars in Krita
1
Is there a way in Krita to import an image without losing its layers
0
How do I make a set of images exactly the same hue/darkness as a sample image?
4
In Krita, using the Rectangular Selection Tool how can I delete and get transparency?
1
How to clear a layer in Krita? delete not working half the time
3
Can you have 2 Krita windows open on 2 monitors at the same time showing the same file?
0
When brushing with a translucent colour, is there any way to make multiple strokes into one?
0
How to copy, move, and delete shapes in Krita
1
Krita brush size on canvas depends on ppi setting