I don't work in graphic design, but currently I have a problem which could be suited for this site. I am looking for a software which allows to measure a 3D - curvature length. Just googling I found that Autodesk has a "measure arc" function which seems to be what I am looking for. Unfortunately, I can't access Autodesk, or other expensive software.

To be more clear, I have a surface (currently in STL format, but I can have it in some other formats as well). I'd like to trace a line (possibly in 3D) along it and know the length of the line. The software I am using only allows to calculate distances (ie along straigth lines)

Since STL is a format typically used for 3D CAD models, it makes sense to use a CAD program to try to open it. And you don't necessarily need a specialized tool to calculate arc length if you're able to calculate the formula for the curve, which you ought to be able to in theory since it's how 3D models and other vector formats are typically stored.

That said, just because an AI file contains the vector data for constructing a shape doesn't mean Illustrator will give you the actual formula that describes each bezier curve. And in the case of STL, the model seems to be constructed out of triangles, so I'm not sure how it can have any curves in it at all.

But if you can approximate the curve with a fairly straightforward Cartesian equation, and given that you can already measure affine distances in the model, then just apply the arclength formula.

If you have to use a bezier curve, then it gets a bit more complicated, but at least according to this answer, it's still doable.

Worse comes to worse, open up the STL file and just calculate the distance between each segment along the "curve": d = sqrt((x1-x2)^2 + (y1-y2)^2 + (z1-z2)^2). It might be tedious if there are a lot of segments in the curve, but it's just straightforward arithmetic and you'll get a result that's 100% accurate to the model.

BTW, short of there being a 3D modeling or CAD/engineering StackExchange community, the most appropriate site on the SE network for this question would probably be Super User.

While not 3D, if you get files into a form Adobe Illustrator can read, you could use Astute Graphics Dynamic Measure function part of their Vector Scribe package. Dynamic measure offers the ability to measure the distance along any path, regardless of whether the path is straight or not. 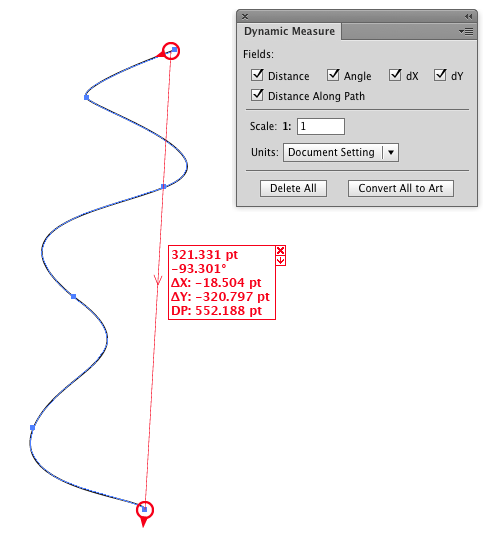 DA01 has a great suggestion with autodesk. Another option I've used back in the day when working for a lighted sign company was CorelDraw's Curveworks. I just did another search and there seems to be an additional tool named CadinTools. I know with certainty that Corel is cheaper than Autodesk and easier to learn.

I would recommend using Blender, an open source 3D modeling program with a rather large community. In fact, a quick search turned up Blender-specific answers here and here.