I have complex symbol, which can (imaginary) exist in different states.

For example, in treeview control node can be either expanded or collapsed, which means different indication.

I want to have one symbol/prototype, but multiple instances of it in different states.

Is it possible in Illustrator?

Rephrasing the question: are all instances of the symbol obliged to be identical to it's prototype in Illustrator?

This is not true in programming: a class instance can differ from prototype by field values. For example, different instances of a vector can have different coordinates.

So, for example, can I have a symbol for tree view indicator, which can be in two states, expanded and collapsed, like here 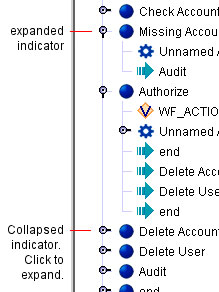 No it's not possible.

With the discontinuation of Fireworks by Adobe, there is now no Adobe product which offers "states" for objects/layers/elements. Illustrator has never had the ability to apply states to objects. I, for one, wish it did.