I've been sent a ui design which includes a header menu, wrapped in rounded corners, whereas the following content element is wrapped in square corners. Also every other primary content wrapper for widgets, sidebars etc are all squared corners. I've always thought this was a huge design no-no, but the designers are quite headstrong and believe it's perfectly acceptable and even advantageous in this situation. (Unfortunately due to some office politics I'm not in a position where I can just tell them to change it). I'm sure I recall seeing something about this in design theory at university, ahem "several" years ago, but can't find any examples.

Am I right to dislike this design from an objective, basic design theory point of view, or is it really not that big of a deal and should be left to a designer's judgement call? (Design has been simplified as the full design is commercial in confidence). 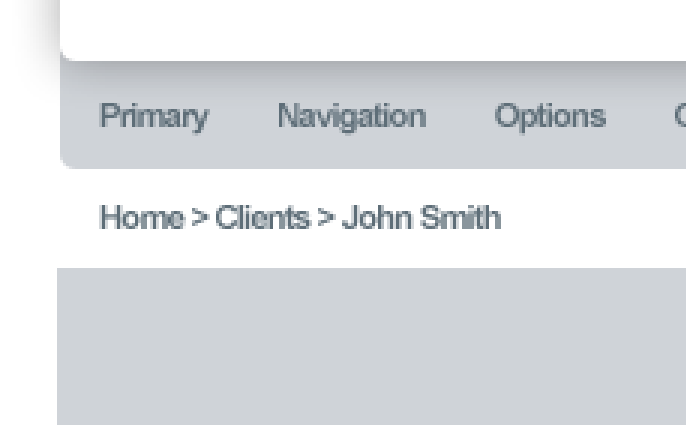 There's a discussion on this same topic over on UX Stack Exchange.

Though usually considered a bit of a design no-no(as mentioned in the link above) I think that in this case it may be an ok idea - it depends on how the content sits. But it seems like it could be argued either way.

The menu bar is a separate component, having it slightly unique subtly sets it aside from content and is beneficial for navigation purposes - the primary goal in web design is to communicate information, having this difference in the menubar as a component makes it easier for the end user to navigate through that information. One could also state that the white space created by Home>Clients>John Smith creates a bridge between the two different corners so you don't actually have a mixture of rounded and squared corners, but rather rounded corners...accompanied by square corners.

Mixing these two types of corners breaks the continuity of the aesthetic. It divides the menubar(as well as the banner above it) from the content on the page. This could create a feeling of a ready made universal template as opposed to that of a cohesive design particular to a specific brand - the banner and menubar don't 'fit' with the other content. (To clarify it's kind of like a 'one size fits all'). Any content for any website could be dropped below the bridge of Home>Clients>John Smith.

Without design continuity you also risk breaking the natural flow of navigation as though a user may not know why, they could be distracted by the break in flow rather than the natural navigation that would most likely occur they could click elsewhere...though admittedly this is a more extreme example. I can't imagine that in this particular case the user flow would be broken based on the corners - but then again crazier things have happened!

Personally I don't really mind it in the design as shown, I'm not particularly fond of it but as a realist unless the content sits badly or creates more of a contrast between the rounded and squared elements, I could deal with it. As a designer it kind of bothers me because I like continuity, patterns and cohesion!

Not the answer you're looking for? Browse other questions tagged website-design interface-design or ask your own question.

1
Triangle cut corners CS5 Photoshop
4
rounding corners of different-size elements
3
Remove bottom corners when using 'Round Rectangle Tool'?
1
How to make rounded corner thumbnail “ containing image of the post ”?
1
How can I create a colour scheme based on two specific, adjacent(ish) colours?
2
Complex Rounded Corners in Ai or Sketch
2
Can I combine rounded and sharp corners in the same design?