How can I apply this FX to the font only and not the whole artwork?

I am using Illustrator 2018 on Windows.

I am creating an artwork/page/image in Illustrator which is basically all text and part of its design the text is distressed using Illustrators Pixelate Plugin. The setting I use is Pixelate > Pointillize = Cell Size 3.

It does exactly what I want on the text but as you can see from the before/after image I attach it also changes/pixelates the white background which I do not want.

Is there a way to tell it to ignore the white background and only apply the FX to the text?

I have tried playing with the Cell Size and placing the text on a separate layer and then applying the FX but the result looks terrible. The plugin does not pixelate it in the same way. I also have Photoshop 2018 so can I do this better using that maybe?

Any hints, advice or suggestions would be much appreciated. 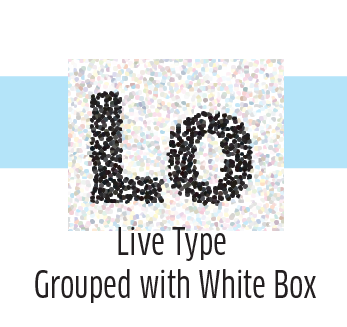 This is the opposite of what happens when using the Effect on only text. The glyph edges are seen as the constraint and no part of the effect goes outside beyond edges. The result is a straighter, more defined, edge on the glyphs. 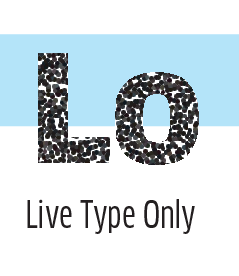 So, to make those edges less defined, an easy solution would be merely use the Appearance Panel to add an additional white stroke to the type and move it behind/below the fill.

Be careful not to make the stroke too thick. The thicker it is, the more the multi-colored cells will appear from the effect and give the impression of an opacity drop off. (This will make sense if you try this and use a thick stroke). 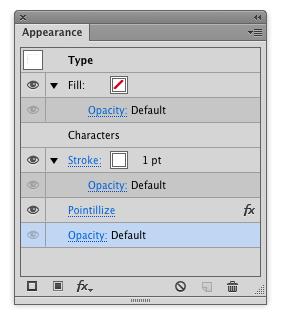 This creates a white "edge" the the type and the effect now has some room to make the black cells rotate/shift beyond the visible edge of the glyph. 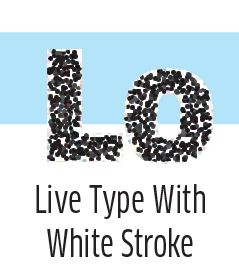 Ideally the stroke would be the same color as any background so it would visually be invisible. But, as you can see in the image above, the white is fairly apparent when over a color.

You can circumvent that by merely changing the blend mode of the type object to multiply. 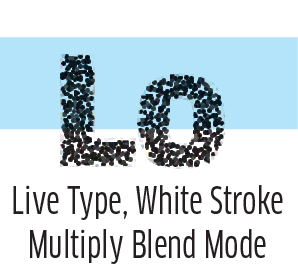 This is for Photoshop. You can be the judge of whether it's "better" or not, although in my opinion, your example looks more like a raster image than anything created in vector software.

Although not vector, it's still possible to create it non-destructively so that the text is still editable.

Not the answer you're looking for? Browse other questions tagged adobe-illustrator adobe-photoshop or ask your own question.

16
Change Background Color of Text Box in Illustrator CS5
2
Is there a simple and automatic way to create halos around multiple (existing) arrows in Illustrator?
0
Illustrator - two triangles with text
7
Practically making interrupted underlines that don't clash with descenders
1
Illustrator CC: Inverting text colour, white on navy blue & navy blue on white
2
What is the best way to reproduce the graduated in width stripes that radiate from the center seen here?
2
How can I adjust these background colors so they are the same?
3
How to create editable tables in Adobe Illustrator?
0
How to change color of bitmap without paint bucket