Transparent strokes not working in Illustrator

Making a graphic to go on a blue shirt. I am trying to make the white stroke of one object transparent on the back object. I was able to use minus front to create the hole (to allow for the shirt color to come through in the photo as an example) but I need the stroke shown to be transparent. I have tried this numerous ways using appearance (opacity and knockout), path (offset), and pathfinder options (minus front). I cannot achieve the look I need. The result is always a hole rather than just the stroke. I know the answer is incredibly simple - but I don't know it! 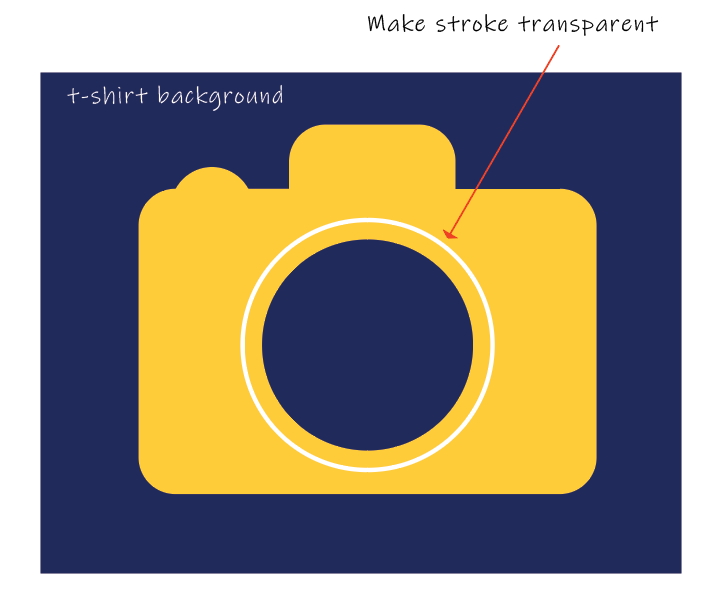 The Knockout Group is great for this if you want to keep your objects separate. You can move them or reshape them as separate objects and maintain the tranparency.

In your case I think that simply expanding the white stroke shape and using Pathfinder Minus Front will get the results you want.

Pathfinder does not do well with Strokes- hence your circle object must be expanded (Object>Expand). Then use Pathfinder> Minus Front.

If you aren't concerned about the stroke remaining a "stroke"...

Expand the stroke, via Object > Expand so it's a shape.
Then Pathfinder operations will function as expected.

Pathfinder doesn't really do much with strokes - Pathfinder needs shapes not stroked paths. In fact, I think divide is really the only Pathfinder operation which will use strokes as expected, but even then it uses the spine of the path, not the stroke appearance.

If you want to make the stroke transparent go to the transparency panel and set its opacity to 0. Then the stroke should disappear.

But I guess wont make much sense in this context. You probably want to subtract the stroke from the form. For that outline the stroke with "Object / Expand" and the either do "Object / Component Path / Make" or use the Pathfinder panel to exclude the form.

5
Why is Illustrator's minus front not working?
7
Set a stroke to knockout a fill behind it with live text in Illustrator
2
Can't cut out or make middle transparent in Illustrator
1
should white text be knockout for logo on top of a background?
7
Convert complex artwork into single color
0
One gradient across multiple layers (compound path unites layers) illustrator
3
Illustrator elements showing through each other in group with graphic style applied
0
How to apply separate opacity masks to different fills of on object in Illustrator?
0
Convert Black Outline Above White Shapes to Transparent in Illustrator