Document with many inline images and metadata captions

I need to create a document with many images that should move up-and-down with text.

The images are between paragraphs. Paragraphs are currently separated with empty lines.

I cannot simply make these images inline, because they should have captions, and captions should be generated from file metadata and should be updatable.

So my question is: How is it possible (and is it possible at all?) to make an image travel up-and-down with text and, at the same time, to have an updatable dynamic caption for this image?

Enter Object > Captions > Caption Setup and set it up as you please. Optionally enable Group Caption with Image.

Place the image somewhere in your document, select it and use Object > Captions > Generate Live Caption to generate the caption.

If you have enabled Group Caption with Image the image and text frame is now a group. Otherwise group them manually.

Simply cut the group and paste it inside your main text frame.

The Live Captions will update even when nested inside a group which is anchored inside a text frame.

I wouldn't use line breaks to add space around the images. Instead make a Paragraph Style for the paragraph containing the anchored object and add Space Before and Space After.

To make things more dynamic and enable you to make changes later in the process, also make three Object Styles: One for the image, one for the text frame with the caption and one for the group. Apply them after you generate the Live Caption.

Live Captions have one major drawback though (which is one of the reasons I never use them myself): The caption text must be able to fit within the width of the image. Multiple lines are not supported! If the text is too long, the letters will simply be crammed together. 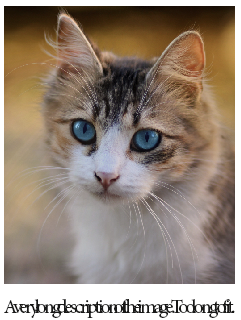 Adobe have added this issue as a feature request in 2017 (I would call it a bug rather than a missing feature). Here, five years later, they still haven't fixed it.

Only way to work around it is to convert the Live Captions to Static Captions, but it's kind of against the whole idea of working dynamically.

Not the answer you're looking for? Browse other questions tagged adobe-indesign images or ask your own question.

7
Setting object style in InDesign
1
InDesign CC: Text not filling all of text boxes
3
InDesign - Text Wrap is Affecting Leading
2
Trying to add a list of photo credits inDesign
1
Indesign: hide text in image caption to be inserted into list of figures (TOC)
1
Adobe InDesign: Need inline graphic to extend outside of text frame
0
Resizing text and Images
3
Hide blank lines when on top of column
2
An inline frame that behave like a single-cell table