I am designing an app icon for an industry-specific business app that does primarily job management. The name is very likely to be called "JobCheck", which may become a part of a collection, or suite, of apps (ie., FinancialCheck, EquipmentCheck, etc.).

I am aware of the overuse of the checkmark symbol, and would very much like to get away from it. However, with the word "check" as part of the app name, there seems to be this expectation that the checkmark would be part of the icon. It's just very difficult to come up with something unique with it.

I have tried to come up with a few rough ideas and I was wondering if I can get some feedback on them. The company I work for already has its own company logo and colour scheme (orange and grey). I'm trying to go for the "flat" look for I feel like something is missing. Please please let me know how I could possibly improve on them. 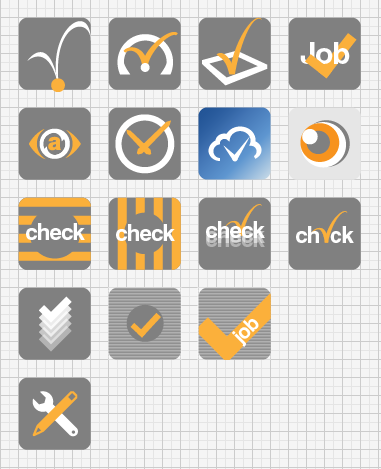 I think most of the icons you've created are good as a start, but the first thing that came to mind when I saw them was: That's a lot of icons!

I think you are now finding it difficult to choose one among the others because you have created so many. Which is not necessarily a bad thing, but the more you 'expand' on different ideas, the less refined each idea gets.

I personally like the first one in the second row and the last one (curiously, they don't have checks). I'd try adding a check to the last one instead of the pencil, there's something interesting in the crossing elements.

I'm not convinced with the stripes, the repetition of elements and the check with the missing e because they are simply difficult to read. The first one in the top reminds me of a bouncing ball, and the second of a speedometer. I kind of like the speedometer, if you want to go for 'effective, fast' or similar.

But, I'd consider a slightly different process. I'd pick three concepts, and try variations from those. For example, your 3 main ideas could be:

Then I'd make 2 designs for each, trying to keep the same concept.

Almost any of the icons you've made can be valid, but I feel they need some more work, some love ;). The graphics are there, the tick is there, but the concept doesn't feel finished. The most important question here would be: Are you happy with them? Do you have a favorite, one that talks to you?

I find these sort of articles very inspiring, because there is so much behind those logos. Logos in general are just fascinating, and while coming up with a nice one is not easy, coming up with a logo that says something about the brand is challenging but rewarding at the same time :)

Based on my experience of designing thousands of icons Simpler is Better. Yours seem a bit too complex. The orange /grey contrast is also not strong enough for my taste.

Not the answer you're looking for? Browse other questions tagged icon logo critique or ask your own question.

2
Getting started with App-Icon-Design
7
Critique: Icon app redesign
1
Critique: Icon design
4
Critique Request: CAD drafting contractor logo
8
Logo design: is this too simple or boring?
0
Remake Icon for commercial use
0
What is the difference between a logo with a certain “image” and logo with just the name of the company?
8
Suggestions on how to improve logo