Why is InDesign pushing short words to the next line? 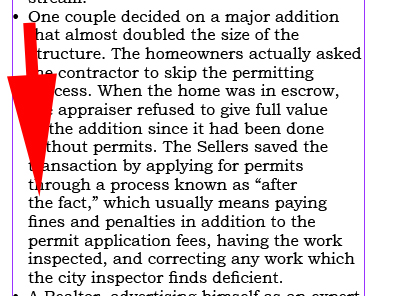 As shown in the image, "the" easily fits on the line above but regardless of what I do, InDesign pushes it down to the next line.

The other answers are correct that this is down to the work of the Adobe Paragraph Composer which is balancing your whole paragraph as opposed to each line individually.

If you do want your "the" to stay on the previous line (without changing to the Single-line Composer) just replace the preceding space with a non-breaking space (Type → Insert White Space → Nonbreaking Space or cmd+alt+X). Although InDesign generally does a good job at this so I would leave it without careful consideration.

InDesign is using a muti-line composer (called Adobe Paragraph Composer) by default. It does not actually try to even your line it tries to even as many lines as possible within the paragraph. So it has detected that the other lines are better off with the 'the' pushed downwards. It creates a less ragged result.

If you want to use a simpler heuristic of one line at a time you can instruct it to do so by choosing the Adobe Single-line Composer option in the justification section of your paragraph style.

As far as I know, InDesign is using the justifying algorithm of LaTeX (which is a very good one!). This algorithm is built to create an optimal justifaction for the complete page. So it could be that in a special line in your left justified text one word could be shifted, but the result of this shift would produce bad typography for the whole page.

If you use an algorithm looking only for a "good" justifying for one line you will get as a result a bad typography for the whole page as known from the usage of Word.

Usually I would say InDesign does a good job with the inbuild justifying algorithm. Better than you or I can do (supposed we both are not learned typographers ...)

If you work with Windows press Control+Alt+X between the two words to eliminate the forced line break.

Not the answer you're looking for? Browse other questions tagged adobe-indesign text typesetting or ask your own question.

3
What kind of paragraph style settings in InDesign have the effect of CSS' `clear: right` property?
2
Mysterious line breaks in InDesign
6
InDesign: grep style to move single i words to next line
0
The lesser of two evils: Choice between a too long line and a too short line?
0
InDesign: Have picture next to text, but keep it in the text flow
0
Indesign GREP capture only next line
1
In InDesign, is it possible to create Math-like Markup by mixing line and block elements?
0
Setup GREP Style to move numbers to next line InDesign
0
A “line” around an unselected layer in InDesign