How to control Alignment tool vertical distribution in GIMP?

I have multiple objects copied onto separate layers, and I'm trying to align them and stack them up so they are spaced evenly to fit precisely within a given area.

I made a selection to act as a reference, moved all the other target layers to fit within it, and then easily used the Align tool (Relative to Selection) to move the top target to the top edge of the selection box and the bottom target to the bottom edge of the box. Then I used the Align tool to select all my targets and clicked the button whose tooltip reads "Distribute targets evenly in the vertical". But the way this works (apparently) is to divide the selection's vertical size up by the relative sizes of the targets, then place each target at the midpoint of its size division. This virtually guarantees the stack of targets will end up being smaller than it should be to fit within the given selection--the top target is moved down and the bottom target is moved up, leaving a margin above and below the stack.

Is there any way to configure the alignment tool to get rid of this margin and make a vertically distributed stack actually fit exactly within the reference area?

In the first picture, immediately before the distribution, the stack of targets has exactly the right height, but the elements are not evenly distributed. 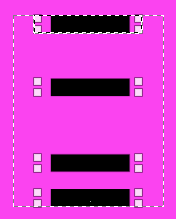 In the second picture, after distribution, the stack of targets is evenly distributed, but the top and bottom targets were inset, so now the stack's height is too short. 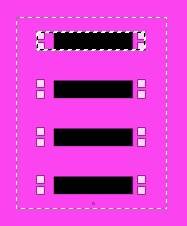 I'm hoping you can tell me how to make GIMP distribute so the stack keeps the correct height but gains even distribution.

You can do it by setting a negative Offset Y in the align tool to fix it. Obviously a little trial and error is required to get it exact, or you could use the Measure tool to measure the height of the rectangle more exactly, since this is the value you need to put in the Offset Y.

The arrange-layer script can do this. Once installed: 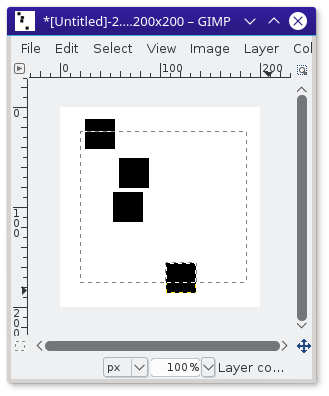 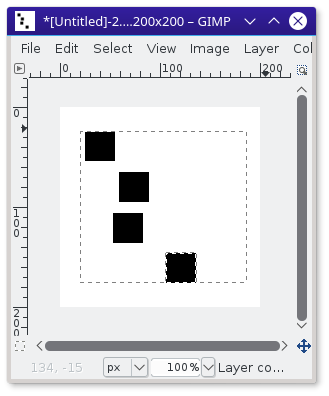 Not the answer you're looking for? Browse other questions tagged gimp alignment or ask your own question.

3
Photoshop Batch Action - Relative Positioning
3
How to control alignment with a reference layer?
1
Illustrator: how to align grouped objects and expand to be aligned top and bottom?
3
How to align rotation of a triangle to a rectangle in Inkscape?
2
What are good small icons for "Distribute objects"?
4
Align object in between one point and one line
2
Where exactly is text aligned in terms of the edges of the text?
5
Sketch: vertical text alignment
1
Distribute tool not working properly
1
GIMP: How can I control the "tolerance" of a tool?