Why doesn't my masked object have a stroke from the object it's in?

I have a group which has a stroke applied: 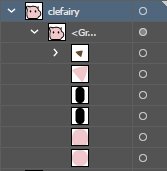 And I want to mask part of an object to change the color on part of it. But when I mask the two objects, it stops applying the stroke to that object.

Is there any way to fix that or a better way to do this?

Firstly, your stroke isn't actually a stroke, but rather a second shape which is slightly larger - behind the path.

Clipping masks follow the path of the topmost object, and they then make that path invisible.

If you wanted an area "clipped" (cut off), you would put the object defining the clipping area - the area you want to keep on the top and then turn it into a clipping mask.

In your scenario, I would suggest that you use an actual stroke for everything (it'll make things simpler later on) and then you can bring the brown box to the front in order to use it as the clipping path.

If you really want to make this properly, I would suggest to merge the two shapes (the ear and the head) using the Shape Builder Tool (Shift+M)

This would also make it that you didn't need clipping masks.

I made my piglet by creating a few circles and polygons (for filler), made one ear and reflected it to the other side, and then merged them all together with Shape Builder:

Kind of looks to me that when you apply the mask, the object and it's mask leave the group with the stroke applied.

You may be able to merely move the <clip group> back inside the <Group>.

Impossible to tell without seeing the layers panel after the mask is applied.

0
Why does the 'roughen' effect go away on my vector whenever I ungroup it?
1
Illustrator: how to draw "snowflake" in live mirror mode?
1
Illustrator: Centering two groups according to an object in one of the groups
0
Creating a new object from the fill of an object
0
Is it possible to use stroke width from kind of variable?
1
Illustrator: Opacity Mask is not moving/resizing along with object it masks, if the masked object is a Mesh object
3
Illustrator elements showing through each other in group with graphic style applied
0
How to have a group stroke with clipping mask applied?